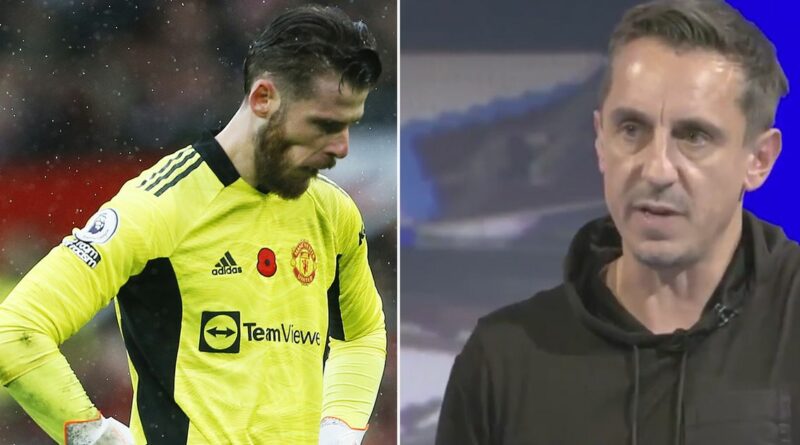 The visitors took the lead the lead seven minutes into the derby, when Eric Bailly put the ball into his own goal.

Bernardo Silva added a second just before the break, as he got onto the end of a Joao Cancelo cross to finish past De Gea.

Gary Neville believed the Spanish international should’ve done better and was at some fault for the goal.

The former United full back was commentating on the game for Sky Sports, as Ole Gunnar Solskjaer’s side lost 0-2 at Old Trafford.

Some fans were unhappy with his analysis of the second goal and believed criticism should be placed elsewhere for Silva’s strike finding the back of the net.

One wrote: “Why is Gary Neville blaming De Gea for the goal, the b***end. Maguire and Shaw are at fault and Ole’s lack of tactics and management. Just needs to stop being bias and focus on being a good pundit.”

Another agreed: “Neville trying to blame De Gea for that second goal. Meanwhile England’s mighty heroes Maguire and Shaw are stood watching the ball like they are waiting for a bus.”

A third stated: “Thought Neville was bit harsh on De Gea there.”

Like a lot of fans, Rio Ferdinand was also unhappy with the United defence for their role in the goal.

He wrote: “Anyone wanna clear the cross… ffs!”

Who was at fault for Manchester City's second goal in the derby? Let us know in the comments section.

Meanwhile, De Gea didn’t completely escape criticism on social media, with some people unhappy with him, despite him keeping United in the game at times.

One fan wrote: “Does all the hard work and fumbles one like that. Christ.”

Another argued: “Dean Henderson needs to be given a chance”

A third added: “He’s made some great saves to keep United in it but really does himself a disservice letting that go in.”