Manchester United reportedly had a deal worth £133million (€150m) in place for Barcelona star Ansu Fati, but the La Liga giants were not ready to cash in on the teenager, who remains one of few shining lights at the Camp Nou. Fati is represented by super-agent Jorge Mendes and it’s now emerged that the Portuguese tried to set up a deal which would have seen the young talent move to United.

Ed Woodward and co were in the market for a right-forward, with Jadon Sancho top of United’s shopping list.

However, the club were not prepare to fulfil the demands of Borussia Dortmund, who wanted around £108million for Sancho.

The player was keen on moving to Old Trafford but Dortmund’s firm stance on the England international saw them explore other targets.

By the close of play on deadline day, United had young stars Facundo Pellistri and Amad Traore through the door. 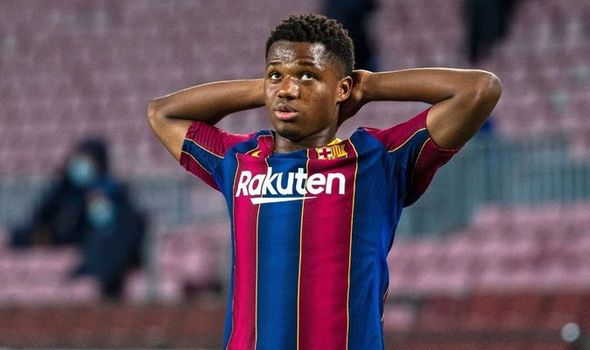 Neither have appeared for the first team yet, with Traore due to arrive from Atalanta in January.

While both remain exciting prospects for the future, Ole Gunnar Solskjaer wanted a signing to immediately improved his starting XI.

That’s why the Norwegian was so set on landing Sancho but it now appears there was another serious contender to join the club.

According to Spanish outlet Sport, United came close to landing Fati after Mendes set up a transfer believed to be worth around £133m.

Barcelona were starved of cash this summer and therefore could not spend big themselves to repair their faltering squad.

Yet the report adds the Barca board blocked the exit of Fati, who they deemed far too important to their project.

There was already huge uncertainty surrounding the future of Lionel Messi and for that reason, Barcelona could not afford to lose the 18-year-old.

Fati’s father, Bori, recently dismissed speculation surrounding his son’s potential exit and instead claimed his son is happy at Barca. 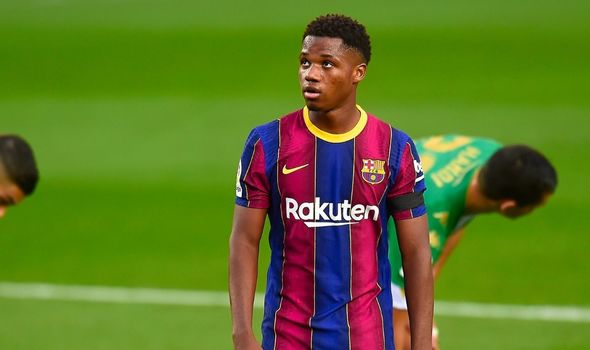 “Ansu is very happy, he is at Barca, the best club in the world.” Bori Fati said. “I’m calm. He is happy at Barcelona.

“He is 17, he is enjoying himself, he is happy at Barcelona and not thinking about anything else. It’s very clear what Ansu wants.”

Fati was not the only Barcelona winger on United’s radar with Ousmane Dembele also of interest.

There were talks between the two clubs over a potential loan deal with a view for a permanent deal but the Frenchman is determined to prove his worth under Ronald Koeman.

Talks could resume in January though given that Barcelona need the cash and Dembele’s involvement remains limited.

QPR 0-4 Nottingham Forest: Sabri Lamouchi's side move up to fourth

Arteta not worried about Arsenal future despite Wolves defeat

Can someone, anyone, guard Tyreek Hill?

CHRIS SUTTON: Edinson Cavani showed he can cut it in England

Arteta admits he’s "very concerned" by Arsenal as pressure piles on Gunners boss
We and our partners use cookies on this site to improve our service, perform analytics, personalize advertising, measure advertising performance, and remember website preferences.Ok