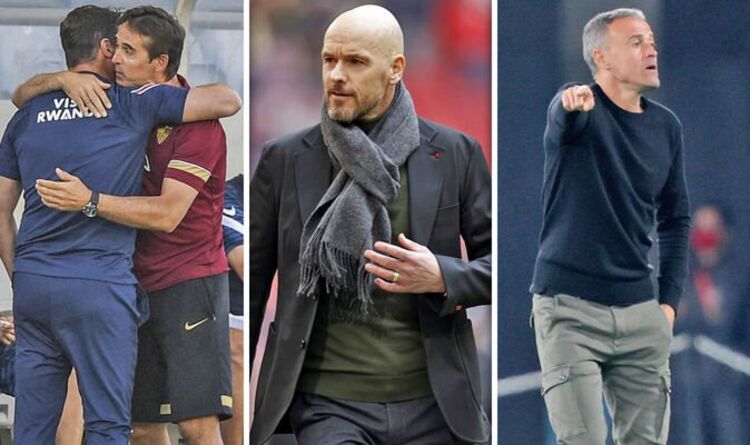 Manchester United have reportedly held internal talks about hiring three other managers in addition to Erik ten Hag, Mauricio Pochettino, Julen Lopetegui and Luis Enrique. John Murtough is currently leading the process of appointing a new boss at Old Trafford. And while Ten Hag is the favourite at the current moment in time, the appointment of the Ajax boss is far from straightforward.

Manchester United are readying themselves for a big summer ahead.

In addition to hiring a permanent successor to Ole Gunnar Solskjaer, who was sacked back in November after a nightmare 4-1 defeat to Watford, they’re also likely to overhaul their playing staff after a turbulent campaign so far.

On Tuesday night, it emerged that United had held talks with Ten Hag about bringing him to Old Trafford at the end of the season with interim boss Ralf Rangnick not in the running to land the role permanently.

It has also since surfaced that the Red Devils are also looking to hold talks with Pochettino, Lopetegui and Enrique despite their respective commitments to Paris Saint-Germain, Sevilla and the Spain national team.

Yet ESPN say that, behind the scenes, the fallen Premier League giants have also discussed hiring three different bosses.

The Italian was heavily linked with the position back in 2013, when Sir Alex Ferguson stunned the club by stepping down having wrestled the league title back from fierce rivals Manchester City.

Ancelotti has confirmed interest from the Red Devils in the past and has been a serial winner throughout his career, with his first spell at Real Madrid and other eras at AC Milan, Bayern Munich and Chelsea all standout.

He is, however, currently in a job with Madrid having returned to the Bernabeu to replace club icon Zinedine Zidane earlier in the season.

And that means United have discarded the option of hiring the 62-year-old, despite previous reports suggesting he’d been recommended by Ferguson as a short-term option.

Mancini’s stock has never been higher after he steered his nation to Euro 2020 glory at the expense of England back in the summer, winning via a dramatic penalty shootout at Wembley.

He’s previously won trophies at Inter Milan and City but he, too, has been ruled out due to the fact he’s considered unattainable.

United have also been eyeing Bayern Munich boss Julian Nagelsmann, who only took over from Hansi Flick at the end of last season.

Yet with the Bundesliga giants soaring, and having no reason to change boss, the German is another candidate to be ruled out.

Who United ultimately settle on pursuing remains to be seen.

However, Ten Hag seems to be very much in pole position to take over at Old Trafford after spending the last five years exceeding expectations at Ajax over in the Netherlands.

Pochettino remains a strong option, too, particularly in the wake of PSG’s recent Champions League exit.

Lopetegui previously flopped at Real Madrid but has done well to rebuild his career with Sevilla, making them a force to be reckoned with on the domestic scene in particular.

And Enrique’s treble at Barcelona in 2015 makes him an appealing candidate, though the chances of him leaving Spain before the World Cup later in the year appear to be remote.

Meanwhile, former Tottenham and Sunderland striker Darren Bent recently urged the next manager of United to axe many of their players this summer due to their disappointing season so far.

He added: “The ones you keep are [David] de Gea, you keep [Raphael] Varane. You need a new right-back, I think.

“I don’t think [Scott McTominay] is good enough but he’s own of your own. Building-wise? Nope.

“I think Fred is a weird one because you have to say he’s been one in the last few weeks who has gone, ‘You know what? I’m up for this’.

“But I guess if you’re trying to start against and build a successful side, he might have to go.

“[Marcus] Rashford is the one where, if the new manager fancies him, there’s something there. If he can get that best out of him then you keep him because he’s young.

“[Pogba] is going to go anyway, he’s on a free at the end of the season. If Manchester United have got any kind of aspirations [he should go].

“I love Pogba as a player, I really do, but Manchester United fans are becoming sick of saying, ‘we’re waiting for that consistency’, so he’d have to go.”