While Manchester United are sitting top of the Premier League table, there are still calls for Ole Gunnar Solskjaer’s head to roll. Tuesday’s 2-1 defeat to FC Young Boys in the Champions League was certainly a chastening experience for the Norwegian. And one name currently being thrown around is Antonio Conte, who is available following his departure from Inter Milan back in the summer.

But Aaron Wan-Bissaka’s red card changed the game and, following a late error from Jesse Lingard, the Red Devils lost 2-1.

In the aftermath, fans on social media have called on Conte to take over at Old Trafford.

The Italian is a free agent, having left Inter Milan shortly after guiding them to Scudetto glory earlier in the year.

Another person who has called for Conte’s appointment is talkSPORT’s Jason Cundy, who said: “That there, shows he’s [Solskjaer] utterly clueless.

“Young Boys are normally whipping boys of European football and United get rolled over 2-1… it was a disasterclass, it was an absolute disaster.

“It exposed Ole, it did badly. I’d sack him. We know what’s coming, don’t we? You’ve got Antonio Conte out there…

“Who’s the better manager? There will be a stage in the season where they’ll be like ‘I wish we did it earlier.’”

Conte has been linked with the United job in the past, especially prior to Solskjaer’s appointment.

And if the Glazers were ultimately forced into sacking the Norwegian, they’ll already have Sir Alex Ferguson’s approval.

The Scot is a huge fan of the Italian and admitted as such when he took the job at Chelsea back in the summer of 2016.

Speaking about Conte, Ferguson said at the time: “Fantastic, you see his energy on the pitch.

“There’s a true saying that the team mirrors the manager, and that’s what they’ve done with him.

“His team have stayed top of the league for so long.

“They lost to Arsenal and Liverpool early on, but since then they’ve been up.”

Conte has always had a good relationship with Ferguson and, when the United icon suffered a brain haemorrhage in 2018, he paid tribute to him.

“I have had the possibility to know him and his wife, to understand this is a special person. Not a normal person.

“He won many titles in his career and I appreciate the man. Yesterday the news changed my day in a bad way.

“We hope to see him recover quickly and our best wishes for this. Now it is very difficult and we want to stay close.”

For now, Solskjaer will keep his job.

United only gave the 48-year-old a new contract back in the summer, shortly after they’d lost the Europa League final to Villarreal.

But if there are more repeats like this, then it’s feasible he’ll be relieved of his duties.

If United fail to win a major trophy this campaign, especially after the arrivals of Ronaldo, Raphael Varane and Jadon Sancho, supporters will want blood.

And history suggests the Glazers won’t hesitate to wield the axe if they feel the club aren’t making great progress on the pitch. 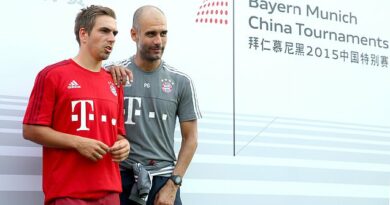