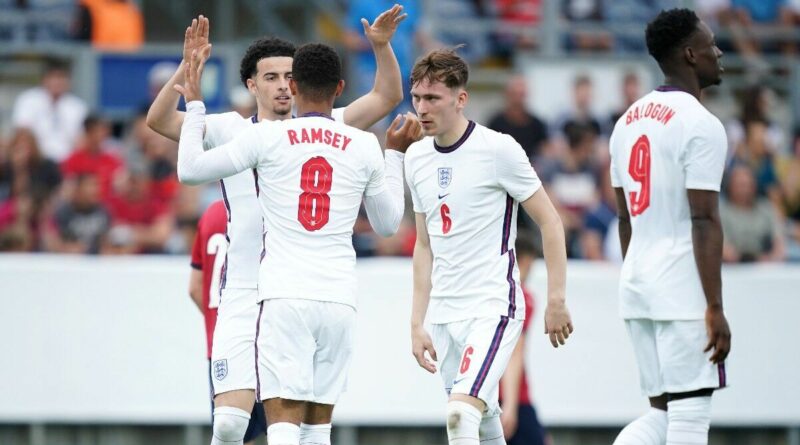 England U21’s latest outing against Czech Republic was the perfect platform for some of the Premier League’s brightest up-and-coming stars to strut their stuff. Lee Carsley’s youngsters battled to a 2-1 win to move level on points with their hosts at the top of Group G to edge closer to the 2023 European Championships.

Emile Smith Rowe – now an established star at Arsenal – lashed England’s young guns into the lead after just 22 minutes with an emphatic finish after Curtis Jones had been thwarted from close-range. Aston Villa starlet Jacob Ramsey doubled England’s lead almost immediately after the break to send the Young Lions to the top of Group G, even though Daniel Fila netted a stunning consolation for the hosts in the final minutes of the match.

But while two established Premier League stars found the net, there were a number of other top-flight starlets who caught the eye, including James Garner. The Manchester United youngster has caught the eye on loan at Nottingham Forest this season, and the 21-year-old capped a fine campaign by playing a key role in the goal that clinched a 1-0 win for Steve Cooper’s side in last weekend’s Championship play-off final.

There have been major issues in the engine room at Old Trafford for some time, and Garner has a real opportunity to make an impression on Manchester United’s incoming manager, Erik ten Hag, in pre-season.

And based on this evidence, the United academy graduate could very well stake a claim for one of the midfield vacancies that need filling ahead of the new Premier League campaign after impressing in the No.6 role.

Fresh from last weekend’s Wembley triumph, Garner was oozing with confidence for Carsley’s men. The playmaker dictated the match for England and looked the part pulling the strings from a deep-lying role alongside some far more established Premier League names.

As well as standing out amongst his Young Lions team-mates, Garner’s influence and ability to keep things ticking over in midfield will not be lost on Ten Hag, who has forged a reputation for deploying an attacking, possession-based style of play during his trophy-laden stint in Amsterdam with Ajax.

Even if the Dutchman decides to splash the cash on a more established name to add some much-needed balance to Manchester United’s midfield, it seems inevitable that Garner will be plying his trade in the Premier League next season after his breakthrough year away from Old Trafford.

While Garner took his chance to impress with both hands, Friday night’s game passed others by. Arsenal youngster Folarin Balogun had the perfect opportunity to show Mikel Arteta that he could play a part in the first-team fold at the Emirates next year by linking up with Smith Rowe in the final third.

But although the 20-year-old showed some neat touches and impressed in flashes alongside his Gunners colleague, he didn’t carry enough of a goal threat against a less than impressive Czech rearguard.