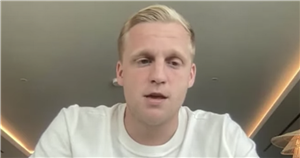 Donny van de Beek has told Rio Ferdinand that the arrival of Cristiano Ronaldo this summer means that Manchester United are ready to take "big steps" in their pursuit of major honours.

The Portugal icon is back at Old Trafford after nine seasons away, a period in which he has won a further four league titles and the Champions League on four occasions.

While Ole Gunnar Solskjaer is delighted at the move, there is one name who is sceptical over where that leaves Van de Beek following just four Premier League starts for the club during his debut campaign.

Although they play in different positions, Van de Beek's agent has suggested that Paul Pogba will now not be needed in forward areas, creating another hurdle for his client in midfield.

Van de Beek, 24, told Ferdinand's Vibe with FIVE podcast when asked about the signing of Ronaldo, Raphael Varane and Jadon Sancho: "Fantastic, fantastic. To be with these players on the pitch is fantastic. Also to train with them, everything I think. That's what we need, winners.

"I'm really positive about us this season. I think we can make big steps now."

Adding: "Of course, the level goes up, for sure. You see that [in training].

"If good players come to the team, the level goes up. It's strange because you train with maybe 24 players, but any one of those good players, they can make a difference."

Will Donny van de Beek have a key role to play at Man Utd this season? Give us your thoughts in the comments section

That comes after Van de Beek's agent Guido Albers expressed some concerns over the arrival of Ronaldo from Juventus, with his player already struggling for game time in attacking areas.

Albers told Ziggo Sport: "Cristiano arrived on Friday which we knew was bad news for us.

"Pogba plays on the left, and with Cristiano’s arrival it means another extra player in midfield, with Pogba moving away from the left."

Before adding of a potential move to Everton during the summer transfer window: "We had conversations with Solskjaer and the board. We took the initiative to find a club and our search ended up at Everton. We opened talks with Marcel Brands and Farhad Moshiri.

"On Monday night [before deadline day] we received a call from Solskjaer and the club who told us that a transfer was out of question and that he had to report himself to training the next morning.

"The perspective now is that we stated that Donny is not a Carabao Cup player, or FA Cup player, or to play only in European games. Donny went to England to play in the Premier League.

"The way the conversation went this time [with Solskjaer] compared to last summer… things are much more clear now. I have full expectations that Donny will get his chance now."