Manchester United star Paul Pogba has set tongues wagging after flirting with Real Madrid once again. The France international has admitted on international duty that to play for the La Liga giants would be a dream, echoing comments made in March last year. But, in Donny van de Beek, United may have already signed a replacement.

Speaking in 2019, at a time where United were actually on song under Ole Gunnar Solskjaer following the departure of Jose Mourinho, the France international revealed he would love to play for Real Madrid.

“Like I’ve always said, Real Madrid is a dream for anyone. It’s one of the biggest clubs in the world,” said Pogba while away with his country.

“There is also [Zinedine] Zidane as a coach and it’s a dream for anybody who likes football.

Then, in July, the United star admitted he was interested in pursuing a new challenge elsewhere.

And, now, Pogba has once again opened the doors to a potential departure by reiterating his desire to play for Real Madrid one day, saying: “Many things have been said.

For United boss Solskjaer, Pogba’s comments are likely to spark another transfer saga. Another year of rumours over a departure, another campaign where his future is up in the air.

But, in Van de Beek, the Red Devils may have already signed his replacement.

There is plenty of mystery over the Netherlands international at the current moment in time. Prior to transfer deadline day he was their only signing, having arrived from Ajax for £40million in September.

Fans expected him to walk straight into the side, to line up alongside the likes of Pogba and Bruno Fernandes in the heart of Solskjaer’s midfield. 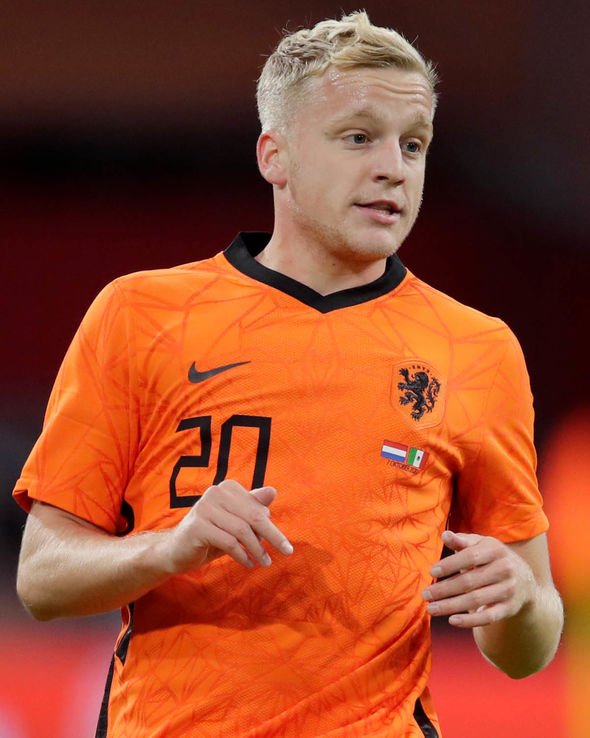 So far, however, Van de Beek hasn’t been given much of a chance.

His only two starts for the club have come in the Carabao Cup, against Brighton and Luton respectively. He did well in both matches, too, but has found minutes in the Premier League tougher to come by.

Van de Beek was benched for the opening fixture of the new season against Crystal Palace, though did come off the bench to find the net at Old Trafford at the first time of asking.

He’s also made substitute cameos against both Brighton and Tottenham in the short time since but, over a month into his Premier League adventure, he’s still waiting for his first league start.

However, United could merely be playing the long game.

Van de Beek is nimble and needs bulking up considerably to ensure he shines in the Premier League, a division where the physicality is greater than any other on the planet.

And United could be merely easing him in, willing to suffer early on in the season to allow Van de Beek a platform to build and improve.

That’s not necessarily kind to the Dutchman right now but Solskjaer is willing to be selfless on his mission to steer the club back to the top of the Premier League, prepared to put others before himself.

And with Pogba pushing for a move away, and United knowing his dream of playing for Real Madrid for quite some time now, then Van de Beek’s lack of game time could be part of the succession plan.

He may well just be their replacement for the France international, albeit one who joined a year early.