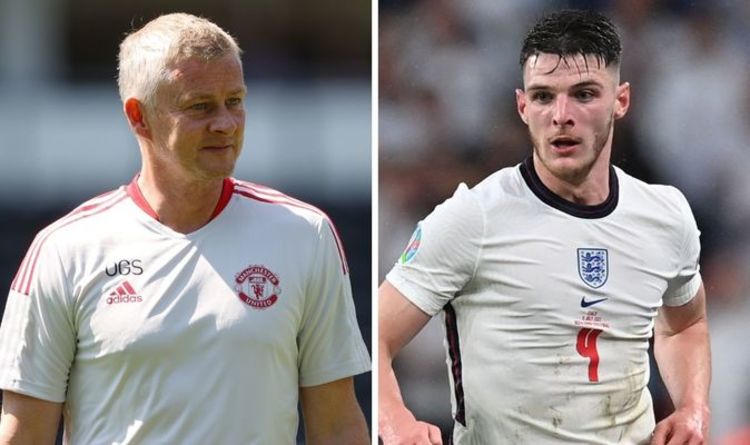 Ronaldo: All you need to know about Man Utd-linked star

Manchester United remain strongly linked with a move to sign Declan Rice from West Ham, but Ole Gunnar Solskjaer may stand in the way of what could have been the original plan. Rice’s performances for England at Euro 2020 have only enhanced his stock on the transfer market with a host of the Premier League’s elite clubs looking at signing him.

The midfielder has given no indication that he’s seeking a move away from the London Stadium.

But United continue to be linked with a move for Rice with Solskjaer keen to bolster his options in the defensive-midfield position.

The 22-year-old is seen as the ideal target, although West Ham have made it clear it would take a bid in the region of £100million to tempt them into selling.

Reports at the end of last season though indicated United may look to cut down that price by using Jesse Lingard in a player-plus-cash deal.

The United academy graduate spent the second half of last season on loan at West Ham and impressed to the point where he was on the verge of making Gareth Southgate’s Euro 2020 squad.

West Ham are keen to bring Lingard back to the club and it was suggested that United would look to include the midfielder in a move to bring Rice to Old Trafford.

But it appears as though Solskjaer is now not willing to let Lingard leave after the 28-year-old featured in the 2-1 pre-season friendly win over Derby on Sunday.

Lingard came on as a second-half substitute and Solskjaer made it clear that he considers the midfielder as part of his plans for next season.

“Jesse has come back, been bright, he wants to fight for his place,” he said.

“What he did towards the end of last season, that’s the true Jesse.

“We lacked maybe some options at times. Jesse is in the plans at the moment.”

That likely rules out any possibility of a player-plus-cash deal which would see Lingard join West Ham and Rice heading in the opposite direction.

Sancho is set to be United’s first summer signing with an announcement imminent while there has been progress in talks with Real Madrid for Raphael Varane.

A defensive midfielder is still high on Solskjaer’s wishlist though with Rice seen as the top target.

He’s currently on holiday in Mykonos with a group of the England squad who reached the Euro 2020 final.

And some United fans hope that Luke Shaw could help convince Rice of a move to Old Trafford after the two were snapped together on a boat trip.

Another posted: “Join Shawberto at MUFC.”