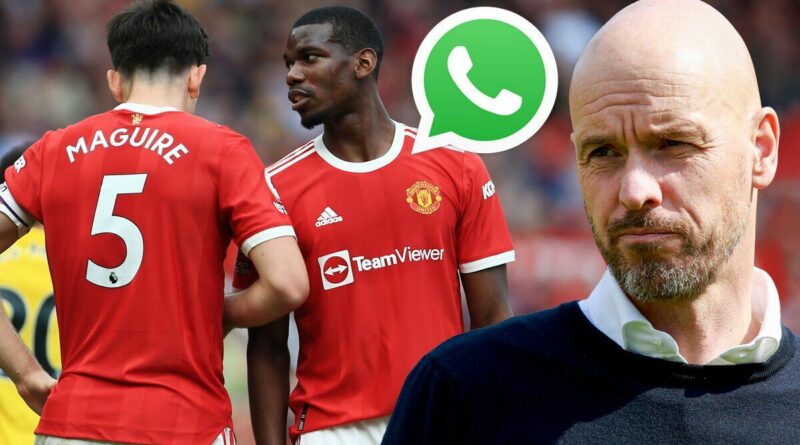 Manchester United’s new boss Erik ten Hag has reportedly scheduled one-on-one meetings with the squad. However, certain players think this will be the Dutchman’s way of deciding whether or not Harry Maguire will be his captain at Old Trafford. And, to make matters worse, Paul Pogba has apparently already left the club’s WhatsApp group as he prepares for a summer move away from Old Trafford.

Manchester United confirmed last week that Ten Hag will replace Ralf Rangnick at the end of the campaign.

And, now, The Mirror say the 52-year-old is intending to hold one-on-one meetings with the squad as he gears up for his new adventure in the Premier League.

Ten Hag wants to get to know the United squad as quickly as possible, with the Dutchman eager to hit the ground running.

He plans to talk to players via Zoom including those who are out of contract, such as Pogba, Jesse Lingard and Edinson Cavani.

Some squad members think, however, that Ten Hag will use the interviews to ‘give him an idea’ over whether or not Maguire will keep the armband.

The England international’s form has dropped off alarmingly in recent months and was taken out of the firing line for the 3-1 defeat to Arsenal on Saturday afternoon.

Maguire isn’t certain to keep the armband, with the likes of Cristiano Ronaldo, Bruno Fernandes and David De Gea potential successors in the role.

A source is quoted as saying: “Erik is meticulous in his planning.

“He wants to know where everyone’s at with their mentality and situation at the club and has said he wants to discuss their futures regarding who wants to stay and who wants to go.

“He wants to give everyone a chance to discuss any issues or problems in private, before he arrives, so he can get a head start on the summer.”

The report does say, however, that Pogba is likely to leave United on a free transfer at the end of the season.

And, ahead of his imminent exit, the 29-year-old has apparently left the club’s WhatsApp player group the squad uses to keep in touch.

Pogba has offers from Paris Saint-Germain and Real Madrid as his time with the Red Devils winds down.

And though he’s hopeful of playing again this season, that doesn’t look likely.

It’s going to be a massive job for Ten Hag, who has been coy when quizzed on the task in hand.

And whether he can succeed where predecessors David Moyes, Louis van Gaal, Jose Mourinho and Ole Gunnar Solskjaer have failed ultimately remains to be seen.

United are next in action against Chelsea on Thursday.

And United midfielder Scott McTominay, speaking after the defeat to Arsenal, has called on his team-mates to play for pride in their upcoming games.

“It is pride on the pitch – give your best, everyone,” he said.

“There are a lot of things going on at the minute.

“When we get back in the dressing room – it’s go home and take a look at yourself in the mirror. You can’t go back to your house and be satisfied with conceding three goals away at Arsenal when we deserved to win the game.

“For us, self-belief, lack of confidence – you can see it all in the last two months.

“We had a half-decent game but even then it is the belief, which is so big in football. It is just not there.

“It is a bit of balls in your performances. That is what it comes down to – the fundamentals of football.

“It is difficult for me to speak right now because there are so many emotions.

“It comes down to the basics and we never do them well enough in big games, recently.”

Thierry Henry is desperate to make an Impact at Montreal