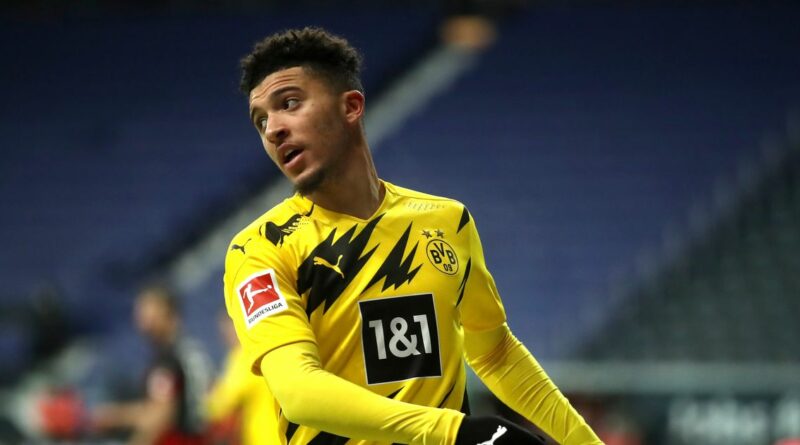 Manchester United’s top brass reckon they dodged a bullet by refusing to break the bank to land Jadon ­Sancho.

And now Old Trafford’s ­hierarchy are debating the need to sign Borussia Dortmund star Sancho at the end of the season.

United were running hot for Sancho last summer when the England winger was seen as the player to catapult Ole ­Gunnar Solskjaer’s stars into the title race.

But that’s happened without Sancho and it’s now believed United interest in the wide-man has cooled.

A year ago, Solskjaer made a late dash to Salzburg in a bid to lure Haaland to Manchester.

After scoring an incredible 33 goals in his last 32 games for Dortmund, the 20-year-old Norwegian hit-man is being strongly linked with Real ­Madrid and Barcelona.

But both Spanish giants ­appear to need serious ­rebuilding – and United are much further along that road with Solskjaer’s squad ­emerging as potential Premier League champions.

The contrasting fortunes of Haaland and Sancho are ­another significant factor.

United came under huge pressure to sign Sancho before the transfer window closed in October, with Dortmund ­demanding £108million for the former Manchester City winger.

Transfer guru Ed Woodward refused to pay up, with United unwilling to splash out a British record fee in the middle of a pandemic which has crippled football’s finances.

Woodward feared a serious backlash if United spent in excess of £100m on one player even though 20-year-old Sancho is one of football’s most highly prized ­talents.

Sancho, though, is still to ­justify that price tag and ­United’s hierarchy, feeling the fee was too high, walked away from a deal, sensing Dortmund were holding a gun to their head.

United and Woodward were hammered for what many construed as a lack of ambition.

Now, though, United’s bosses are more convinced than ever that it was wise not to cave in to Dortmund.

With United flying high and about to welcome £37m ­teenage wing sensation Amad ­Diallo from Atalanta this month, they feel justified in backing away.

Sancho’s recent form has done little to make them regret their decision.

Last season he was electrifying for Dortmund, scoring 20 goals in 44 games as well as a double for England against Kosovo in a Euro 2020 qualifier. He also weighed in with ­numerous assists.

The youngster scored in just one of Dortmund’s final 11 games of last season – a ­hat-trick against relegated Paderborn.

And the picture hasn’t ­improved for Sancho this ­season, with Dortmund ­sacking Swiss coach ­Lucien Favre before Christmas after a 5-1 hammering by newly ­promoted Stuttgart, a third ­defeat in five games.

Dortmund are off the pace in the German League – and ­Sancho has yet to score a ­Bundesliga goal this season.

United sources say Sancho is still on their radar but Haaland is the striker boss Solskjaer ­really wants, with reports ­suggesting the striker has a £70m release clause to be ­activated at the end of next season.

The big drawback is United would once again have to ­negotiate with troublesome agent Mino Raiola – Paul ­Pogba’s controversial advisor – who represents the ­Norwegian goal-machine.

United bosses privately insist they wouldn’t be put off dealing with Raiola over Haaland.

They believe the dynamic with the vocal agent would be much simpler with Haaland than it has been with Pogba, who has failed to fulfil his ­potential since arriving at Old Trafford from Juventus in an £89m deal in 2016.

It would be a gamble – but one Solskjaer would take to land Haaland.

Former chairman Hill-Wood, who died at 82, built the modern Gunners