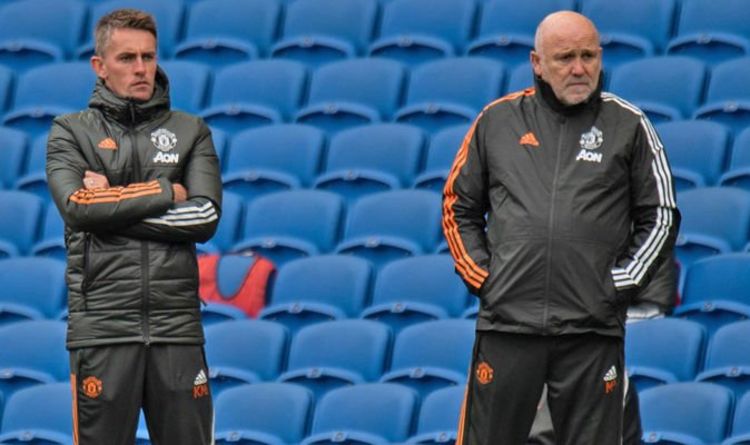 Manchester United will be keeping Kieran McKenna and Mike Phelan in their current roles to help Michael Carrick in the wake of Ole Gunnar Solskjaer’s departure, it has been claimed. The Red Devils have confirmed the sacking of the Norwegian after nearly three years at the helm. And Carrick is now poised to temporarily take charge while they hunt an interim replacement.

United were battered 4-1 by Watford in Saturday’s Premier League clash, with the Red Devils comprehensively outplayed on the day.

And, on Sunday, they confirmed the departure of Solskjaer.

In a classy statement, they said: “Manchester United announces that Ole Gunnar Solskjaer has left his role as Manager.

Yet The Athletic say Phelan and McKenna won’t, for now, be joining Solskjaer out of the exit door.

They’re primed to help Carrick in his new role, with the former midfielder to be in the dugout for Tuesday’s Champions League match with Villarreal.

And it’s stated that while the board didn’t initially want to axe Solskjaer, the defeat to Watford saw their stance change.

Speaking after the defeat at Vicarage Road, the Norwegian had insisted he was still the right man for the job.

“I always have belief in myself.

“But at the moment it’s a difficult time for us.

“I can trust every single one of there to give what they have, but the results are difficult.

“I believe we can turn this round. I understand the fans, who have supported the club through thick and thin, and have been great over the last few years.

“It’s a difficult period, we have had a hard time since Sir Alex left, and the fans who have been here – since I came in – have been unbelievable.

“They understood the situation, the signings this summer raised expectations, rightly so, because we brought some top players in and having been second last year we hoped to kick on.

“At the moment, we can’t seem to find our form, and it’s their right to show their opinion.”

Several names have been linked with the United job in recent hours.

Julen Lopetegui is one, with the Spaniard working wonders over in La Liga with Sevilla.

Laurent Blanc is another, with the Frenchman previously spending two years at Old Trafford as a player.

And Zinedine Zidane has inevitably been mooted, though he doesn’t appear to be in a rush to return to management just yet.

Solskjaer is the fourth managerial casualty at United of the post-Sir Alex Ferguson era.

He joins David Moyes, Louis van Gaal and Jose Mourinho on a list of managers who tried, and ultimately failed, to bring the glory days to Old Trafford.

'It's harsh!' Declan Rice leaps to the defence of under-fire Chelsea star