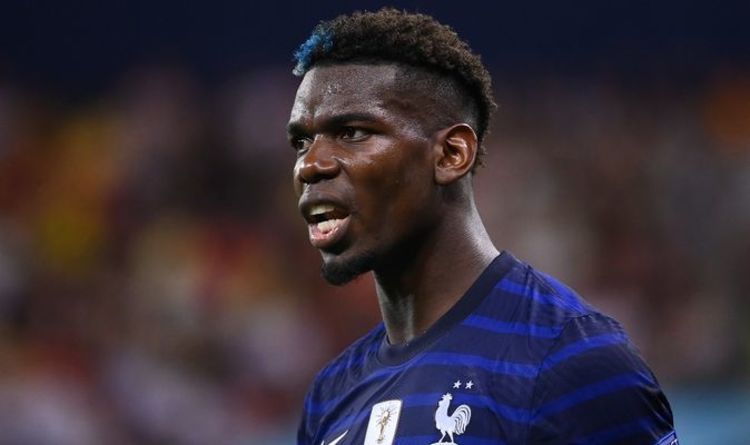 Paris-Saint Germain reportedly want to sign Paul Pogba from Manchester United this summer. United are in talks with Pogba over a new deal – but Ole Gunnar Solskjaer may be left to sweat on whether he can count on the World Cup winner for the new Premier League season.

In recent days it was reported that Pogba’s representatives were in talks with PSG over the possibility of a move – with the 28-year-old said to be increasingly open to the idea.

There has been speculation over the France star’s future for the past couple of campaigns, and that only increased when his agent Mino Raiola said season that a move would be best for all parties.

Since then, Solskjaer has re-integrated Pogba into his United team – although it was noticeable at Euro 2020 that he relished having more freedom to attack while playing for his country than he does when lining up for his club.

And now PSG are plotting to step up their pursuit of Pogba in a bid to prise him away from Old Trafford in the current transfer window, according to reports from France.

The Paris side have already signed wing-back Achraf Hakimi from Inter Milan, and have snapped up Georginio Wijnaldum and Sergio Ramos after they left Liverpool and Real Madrid respectively.

Italy keeper Gianluigi Donnarumma is also set to join on a free, having impressed at AC Milan.

And Pogba is the next target in PSG’s sights as they launch an ‘arms race’ against Europe’s top teams, according to L’Equipe.

The French publication says Mauricio Pochettino’s side want Pogba, but must offload players before they sign the Paris-born talent.

And that could leave United sweating through the summer over whether they will hold on to their club-record £89million signing.

Pogba has entered the final year of his current deal, but United are believed to be keen for him to extend his stay and are in talks over a new deal.

Those talks could drag on while Pogba and his representatives wait to see whether PSG will firm up their interest with an official bid.

And the club’s need to sell players first will slow things down in that respect – potentially leaving United boss Solskjaer in the dark over whether he can incorporate Pogba into his plans for the new campaign.

United could follow the lead of Borussia Dortmund, who set the Premier League giants a strict deadline last summer to come up with an acceptable bid for Jadon Sancho.

The Red Devils failed to meet that deadline, leaving Dortmund to benefit from the England winger’s services for another season – although a year on his much-vaunted move to United is imminent.

At a recent press conference, Pogba was asked about rumoured interest from PSG – by his own team-mates.

Pogba sneaked up on pals Prensel Kimpembe and Kingsley Coman as they faced the press at Euro 2020 – but he was quickly made to regret his surprise intervention.

Pogba then simply said “No”, before hastily leaving the scene while Kimpembe and Coman collapsed in laughter.