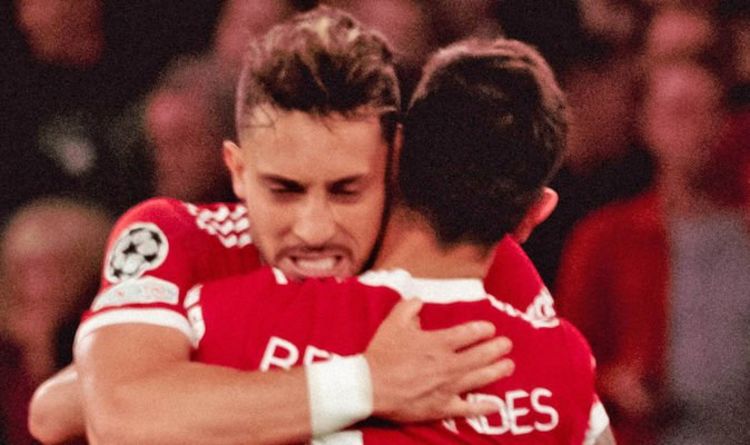 Manchester United star Bruno Fernandes has explained what he told Alex Telles before the Brazilian’s sensational screamer against Villarreal on Wednesday night. The Red Devils were poor throughout the contest at Old Trafford. But a late winner from Cristiano Ronaldo saw them claim all three points on a blockbuster night of action.

Manchester United fell behind against Villarreal through Paco Alcacer, who beat David De Gea in the 55th minute.

However, Ole Gunnar Solskjaer’s side then upped and ante and levelled through Telles.

The left-back has struggled for regular action since his move from Porto a year ago but this goal, certainly, was worth the wait.

The Samba star expertly volleyed home after a deft chip from Fernandes, in a goal reminiscent of Paul Scholes’ thunderbolt against Bradford many years ago.

And Fernandes, speaking to club media, has opened up on how he and Telles planned the goal.

“Alex was coming to me and he wanted me to do the overlap and if there was a chance, he would pass it to me in the box,” said the midfielder.

“I tell him, ‘No, just go to the edge of the box and I will ping the ball over there and you just kick it first time or if you have time, control it.’

“But after that, it’s all the quality of Alex.

“Nothing to do with me. Okay the ball was good, the ball went straight to Alex but Alex made a really good strike and it was an unbelievable goal, honestly.”

“We knew it with Cristiano, at any moment, every ball in the box could be a goal,” continued the former Sporting Lisbon star.

“They are the strikers who have the feeling for the goal.

“They feel it and Cristiano did it once again, and he will do it more and more in the current season.

“He and Edi and Anthony will be really important for us because they will score many, many goals.”

Fernandes then acknowledged United fans, hailing them for their support on what was a chastening night at times.

“It was my first Champions League night here with fans and it was unbelievable,” he said.

“Obviously, everyone sees it as a special competition and it is special for everyone but I think at Old Trafford it has been special every time with fans.

“So I cannot see this as being better than the ones because the fans have been fantastic in every game we’ve had.”

And he even had time to praise Villarreal for their plucky performance as well.

“We know they play well, they are good on the ball. We know the coach was also here in England already.

“It’s always really tough to play against them, but I think we did a good job. Sometimes we have to be patient and not press all the time and I think we did the right job.

“The main thing was the three points and we got it.”

'Lukaku treats me like a younger brother': Esposito lauds team-mate

AFCON chiefs look at moving tournament back to January start