Manchester United star Bruno Fernandes has given a brilliant response to Jose Mourinho. The Tottenham boss recently aimed a dig at the 25-year-old over his penalties. But the Portugal international has brushed it aside while boasting about his prowess from 12 yards.

Manchester United signed Fernandes in January, with the 25-year-old sparkling ever since his move from Sporting Lisbon.

That didn’t stop Tottenham boss Mourinho aiming a dig at the United star, however, with the 57-year-old saying: “Bruno came in, was fit, played very well, improved the United team and also proved to be a great penalty taker, one of the best in the world, because he had about 20 to score.”

And Fernandes has now responded, telling Portuguese newspaper A Bola: “I honestly did not feel stung, I felt that I am a good penalty taker and nothing more.

“I understand, but what I take from his words, because I’m a very positive person, is that he said I hit penalties well. 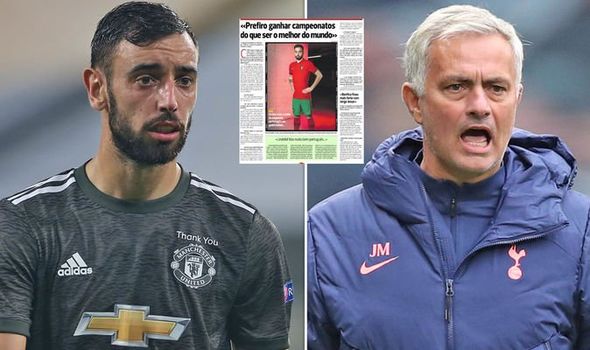 “It is a reality, not least since I arrived at Manchester United, I have not missed one. And I hope I don’t fail.”

“I’ve only missed two penalties, one for Udinese against Napoli and then in the Portuguese Cup, with Loures.”

Fernandes was also asked about his impact at United and responded by saying: “I think that in Portugal you talk a little bit about rivalries… more than exactly for being good or bad.

“People still have a bit of that thing of saying: if you are a Sporting player I cannot do well, I cannot say that you will do well.

“It was a good impact, because we managed to reach the Champions League and now our goals have to be different, because we have not won any trophy and a club like Manchester United, which in the last few years, didn’t win a trophy…” 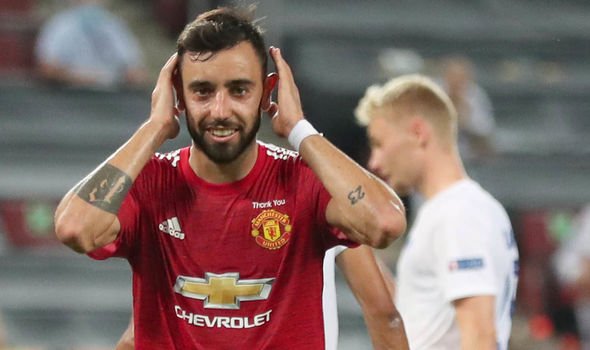 “Even today I hear people saying, ah, he only scores from penalty kicks… But a little while ago, I saw the statistics and, except for penalties, only Kevin de Bruyne has a higher involvement in goals than me in England when it comes to midfielders.”

Some fans have questioned whether Fernandes will continue to perform at such a high level.

He looked leggy towards the end of the campaign, looking particularly exhausted in the 2-1 Europa League defeat to Sevilla.

But Gary Neville feels he will, saying: “Bruno Fernandes was shattered by the end of the season.

“In the last few games he looked absolutely spent, but the expectation, what he’d done since he’d come in, he played in every single game, even the game at Norwich in the FA Cup, which was just bizarre at the time.

“I think Ole had a thing with him where he thought he’d just keep him going.

“But there definitely was that dip towards the end where he looked like he needed that rest. Hopefully, he’s had that rest now and he’s ready to go again.

“His attitude doesn’t tell me, and when you watch him, his performances don’t tell me that there’s going to be a dip because he just looks like he’s got that belief in himself and the courage to take the ball and even if he has a difficult start to the season he’ll not lose that belief to get on the ball and go and find space, try and play the pass that is difficult and try and play the ball forward.

“That’s the big thing for me, he always looks for a pass forward to try and unlock a team. He’s enabled the front three to become a lot better.”

Fulham set to complete the £13.7m signing of centre back Marlon Santos