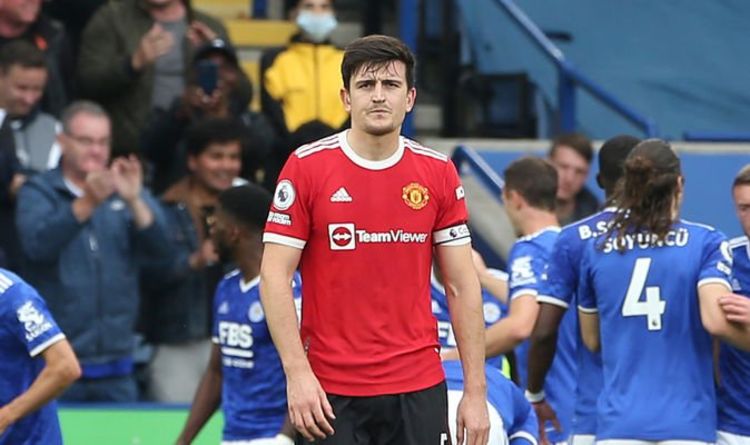 Manchester United captain Harry Maguire was cruelly taunted by fans of his former side, Leicester City, as the Foxes romped to a dramatic 4-2 victory at the King Power Stadium. Maguire was at fault for the first Leicester goal as Kelechi Iheanacho pounced on his poor touch, and he was on the field as they put three more past his side to claim the three points.

It was a relatively calm first half compared to what came after the break, although Mason Greenwood and Youri Tielemans notched a screamer apiece to tie it up at 1-1.

In a frantic final 15 minutes, the returning Marcus Rashford drew United level after Caglar Soyuncu had scored, before two late goals sealed the win for Leicester.

Maguire was a surprise fixture in the United back line after only training with the first-team for one session following an injury he sustained in September.

He was subsequently thrown into the lion’s den by boss Ole Gunnar Solskjaer as the Foxes ran riot to claim a memorable result.

JUST IN: Worrying Martin Odegaard claim made by former Arsenal star – ‘he’s open to coming back’

His former fans also gave him a not-so-subtle dig, singing “Harry, what’s the score?” before the full-time whistle.

Maguire was a fan favourite at the King Power Stadium before a big-money move took him to United in 2019.

He has been the picture of consistency under Solskjaer since making that switch, although injury problems have recently become his undoing.

In an eyebrow-raising choice from the manager, the 28-year-old was thrown straight back into the deep end against his former side to try and keep a rampant Jamie Vardy at bay.

Maguire and deputy centre-back partner Victor Lindelof managed to do so until the 83rd minute before Vardy netted his seventh goal of the season.

Still, the United defence gave way long before that as Vardy was the third man to get himself on the scoresheet.

It was not a pleasant afternoon for the United centre-back, and it will have been no rosier in the dugout as Solskjaer comes under increasing pressure.

With an unenviable run of fixtures coming his way, this should really have been a banker for the Norwegian as the likes of Liverpool and Manchester City await in the next few weeks.

As top coaches like Antonio Conte and Zinedine Zidane remain in the shop window, Solskjaer cannot allow results to slip any further.

Raphael Varane’s injury absence will be another obstacle to overcome, but their embarrassment of talent at the top end of the pitch should be more than enough to offset that loss.

Jadon Sancho was hauled off after drawing yet another blank since his summer move from Borussia Dortmund, while Ronaldo also failed to make his mark on the encounter.

It will be back to the drawing board for Solskjaer, Maguire and co. once the dust settles from an afternoon enjoyed by Leicester fans at their expense.