Manchester United have reportedly picked Nottingham Forest star Brennan Johnson as an alternative to Antony should a move for the Ajax forward fail with James Garner recommending the player. Erik ten Hag is looking to improve the club’s attack this summer. And it appears the Red Devils have several names in the frame as they plan for a brighter future with the Dutchman at the helm.

Manchester United need a new forward following the departure of Edinson Cavani, who is now hoping to play in Spain this upcoming season.

Links to Antony have grown stronger in recent days, with reports in Brazil suggesting the Red Devils had already seen a bid for the Samba star turned down.

And, now, The United Stand say United have identified Johnson as a potential alternative in case a deal cannot be struck.

It’s stated the Wales international is ‘being explored’ after scoring 19 goals across all competitions last time out.

The 21-year-old was also on target for his country recently, notching in matches against Belgium and the Netherlands.

United are already in talks with Forest for Dean Henderson, who is primed to leave after struggling to take the No 1 shirt from David De Gea.

And it’s stated that Johnson’s name has been discussed as part of the talks.

However, Forest are said to be ‘reluctant’ to let the forward go at the current moment in time.

They’re worried they wouldn’t be able to find a suitable replacement for Johnson and would only be willing to do business for around £30million to £40m.

With Forest back in the big time after securing Premier League promotion, they see the 21-year-old as a vital part of their plans.

Garner has apparently recommended Johnson to the United hierarchy, having been impressed by his fellow youngster during their time in Nottingham together.

Arsenal are said to be monitoring the 21-year-old’s situation too, however.

The Gunners want an upgrade on Nicolas Pepe, who has failed to live up to expectations in the three years since his blockbuster move from Lille.

The report concludes by saying United will continue to keep Antony as their priority.

However, Johnson’s versatility makes him an attractive proposition – and what ultimately happens remains to be seen.

Sky Sports reporter Dharmesh Sheth, meanwhile, has claimed United have been in contact with Ajax for Antony.

“The interest that they do have is in another Ajax player, and you can see the theme here, in Antony, the Brazilian winger,” he said.

“So, I think there’s an interest there.

“There’s been initial contact with Ajax, and look, the relationship between Manchester United and Ajax is a very, very good one.

“They dealt with Donny van de Beek when he arrived a couple of summers ago.”

Speaking in April, former United star Luke Chadwick expressed a belief that Antony would be a good addition to Ten Hag’s squad.

“Obviously there are players in that position – Elanga, Rashford, and Sancho, who’s showing better form now and who looks like he has a big long-term future.

“But you can never have too many good players, so if Antony does come in I’m sure everyone at the club would be fully behind that. 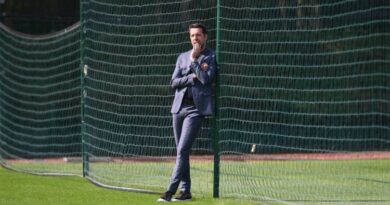