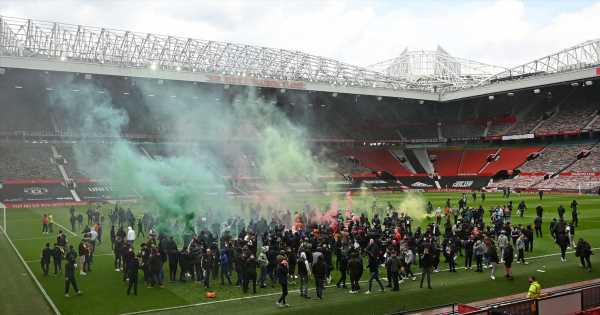 Sunday's Premier League match between Manchester United and Liverpool has been delayed after United supporters entered Old Trafford as part of a protest against the Glazer family.

Supporters were seen protesting on the pitch as frustrations boiled over against the unpopular owners of the club, with fans lighting flares and demanding that the Glazers sell up.

Green and gold smoke filled the air as the supporters stormed onto the pitch, with many holding banners referring to the Glazers' apology over their bid to join the doomed European Super League project.

Co-owner Joel Glazer eventually apologised for United's decision to join the league, but fans held banners which declared 'Apology not accepted. 50+1' in reference to a fan-led ownership model that they would like to see introduced.

Supporters left the ground before some soon returned, while flares were also thrown in the direction of Sky Sports pundits Roy Keane and Jamie Carragher and songs were directed at both.

One fan was seen climbing on top of the goalposts, with missiles and litter strewn all over the pitch.

A television camera was said to have been damaged in the incidents, while members of both playing squads and referee Michael Oliver were told not to head inside the stadium.

Both teams named their starting XIs for the match, but it was soon announced that the scheduled 4.30pm kick-off would have to be delayed.

The teams are as follows: