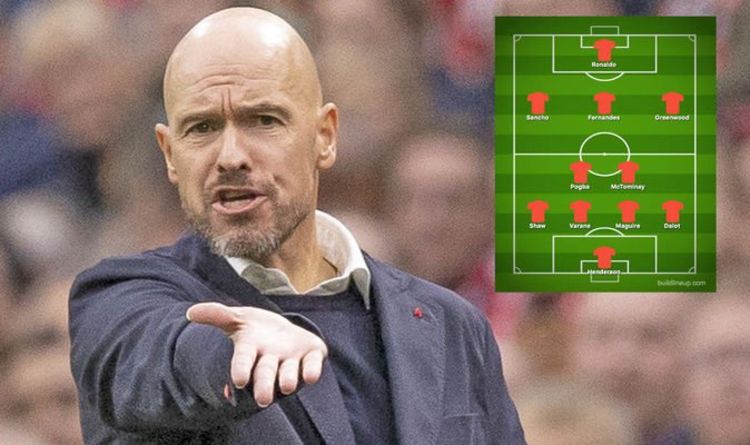 Manchester United are adamant Ole Gunnar Solskjaer isn’t going anywhere for the time being. Though results have been poor of late, with the club failing to win four of their last six matches across all competitions, the Red Devils are insistent the 48-year-old retains their full support. However, some fans have called on Ajax’s Erik ten Hag to take over instead. So Express Sport will now take a look at how the club would look if the Dutchman took charge.

Though David De Gea has been back to his best at United this season, Ten Hag favours youth.

And that could benefit Dean Henderson, who is yet to make a single appearance in the Premier League this term.

Henderson is expected to become United’s No 1 in the future.

And with Solskjaer backing De Gea at present, that’s led to talk of a possible departure.

However, under Ten Hag, the England international could be given the minutes he craves.

Ten Hag likes his full-backs to attack at Ajax.

So that’s why he could select Diogo Dalot over Aaron Wan-Bissaka, with the latter’s struggles going forward well-documented.

The rest of United’s backline should stay the same, however.

Harry Maguire and Raphael Varane, when fully fit, are both undroppable in the centre-back positions.

And it’s a similar story with Luke Shaw, who has been resurgent over the past 18 months for club and country alike.

Ten Hag likes brilliance and brawn in the middle of the park.

And he could use Scott McTominay in a similar way to Ryan Gravenberch, playing him in a flat midfield two.

Both players are similar in terms of they’re box to box players, capable of making a difference at both ends of the pitch.

And it’s possible Ten Hag would abandon the experiment of playing Paul Pogba out wide, instead deploying him in the heart of his team.

That would, therefore, give Bruno Fernandes free reign in the No 10 position.

Cristiano Ronaldo will play most matches for United, regardless of who’s in charge.

But, when it comes to the players around him, that’s less easy.

As mentioned above, though, Ten Hag likes youth. So it’s possible Mason Greenwood and Jadon Sancho will both benefit.

Greenwood may have struggled of late, having scored three goals in three games at the start of the campaign, but the arrival of a possible new manager may help him get even better.

And Sancho has toiled with no goals and no assists but Ten Hag’s astute footballing brain would, perhaps, see him turn things around.

While United have faced calls to sack Solskjaer, John Murtough has revealed they’re planning for the future with the Norwegian in mind.

“We’re aiming for consistency and continuity in recruitment. We have a full process in place, making sure we’re planned in what we do,” he said.

“Squad development is never-ending and constantly evolving. We’re sitting down with Ole and we’re talking about future plans in terms of where the squad will go and how we think it will develop.

“We want to balance squads with the right profile in terms of positions and in terms of age. The current squad has good balance with young, exciting players coming through, and those in the middle in the prime of their careers. And then you’ve the more experienced group – we can learn a lot from them, and they’re already having an impact on some of the younger players.

“We want a squad that can challenge today but also in the future as well.”