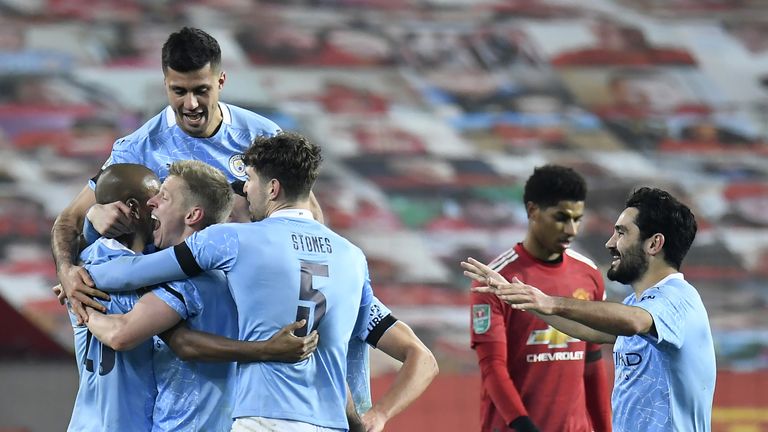 Manchester City are into the Carabao Cup final after beating Manchester United 2-0 at Old Trafford, and four points off Premier League leaders Liverpool with two games in hand. Listen to The Gary Neville Podcast for his verdict on City, and what a semi-final defeat means for Man Utd.

Manchester City are returning to their top levels and will be favourites for the Carabao Cup final, and Liverpool’s main concern in the Premier League title race, says Gary Neville.

Pep Guardiola’s side backed up their impressive 3-1 league win at Chelsea with a 2-0 victory at Manchester United on Wednesday in the semi-finals of the Carabao Cup.

Goals from John Stones and Fernandinho at Old Trafford sent City into the competition’s final for the fourth year in a row, where they will meet Jose Mourinho’s Tottenham.

Neville believes City will be favourites for that Wembley clash if they maintain their current form until the April final, and says Liverpool’s defeat to Southampton on Monday, which left City four points behind with two games in hand, has opened the door in the Premier League for Guardiola’s rejuvenated side.

“City, over the 90 minutes, looked like they are back to their best or near to their best,” the Sky Sports pundit said on The Gary Neville Podcast.

“If you had said to me before the game at Stamford Bridge on Sunday who would be the favourites for this game, I would have said Man Utd. But then having watched City deliver that first half an hour and then see the game out the way they did in the second half [against Chelsea], it just made it a lot more interesting tonight, in the sense you wondered whether this was City back to their best.

“The way they started the game, the rhythm in the passing was back. Pep Guardiola looked like he had his spark back on the touchline.

“I said a few weeks ago, watching City, it was almost as if the players had become bored of playing really well and achieving the standards they had achieved previously. 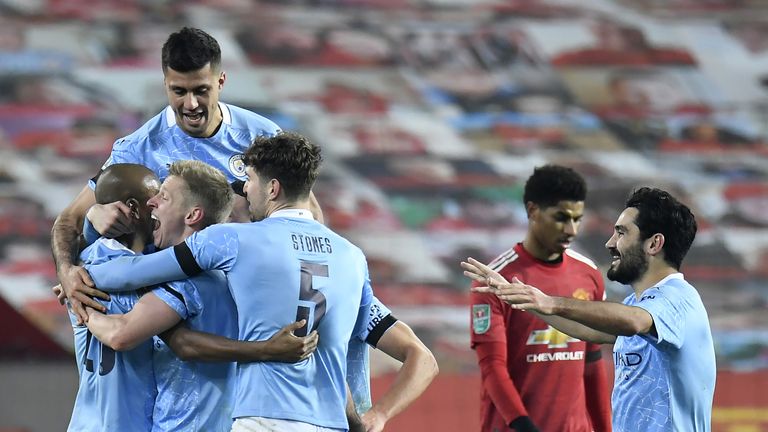 “But I imagine since Sunday Pep Guardiola has said to them, ‘do you not enjoy playing football more like that than you have in the last few weeks?’

“They were absolutely sensational against Chelsea for 25 minutes, they cut them open. Their passing was so precise, sharp, quick, you cannot live with it. You cannot get anywhere near it and there were periods in that first half where City were brilliant.

“United played well in the game, they were managing it, they were living with it, and it’s difficult to live with it – City came close, they hit the post.

“United looked dangerous through Paul Pogba, Anthony Martial and Marcus Rashford but could not get the goal.

“Overall I do not think Ole Gunnar Solskjaer will come out and say they deserved to win tonight – he will say they played against a really good side.”

There’s been a spark; City stood up

Man City have been hit by coronavirus in recent weeks, with a number of players sidelined. However, despite those difficulties, they have been able to produce two standout performances.

Neville believes something has galvanised the group together – whether it is something mental, in terms of the players’ resolve, or how the team is playing in an enforced formation without an out-and-out striker.

“Something has lifted them pre-Chelsea,” said Neville. “Maybe it’s the reaction to the fact they cancelled the game at Everton. But they were a different level.

“I have to say, sometimes that can happen – you do not know what’s going to spark a season and sometimes it can be when you are at your lowest moment, and players are out, and you think it’s going to be the most difficult, people just stand up.

“On Sunday it was Kevin De Bruyne playing almost as a false nine centre forward and you think to yourself, ‘how is this going to go?’ It just seemed to click. The passing, the rhythm, Ilkay Gundogan in midfield started to drive them forward.

“Out of what would be adversity with the positive COVID tests, the game being cancelled, people potentially criticising them, they have clicked. Guardiola looks as if he’s got that spark in his eye because he has seen his team play football.”

Why City are final favourites and Premier League contenders again

This return to form puts them in a strong position with the first silverware of the season and the Premier League in their sights.

“Liverpool dropped points on Monday night and from a Man Utd point of view we had a bit of a smile,” said Neville.

“But Man City players, having played like they did at Chelsea on Sunday, they will have been the ones in the background thinking, ‘that was a good three points dropped for us, because we know we can win this title, we know we can beat that Liverpool team’.

“Liverpool are making mistakes, and they needed to make mistakes to let Man City back in – but they are back in.

“Playing like that they are a dangerous proposition. They will be the ones that will most cause Liverpool problems.

“Man Utd are immediately in their eyeline but City are there lurking and if they are playing like that they are going to be really dangerous.

“The final? I may have called it 50-50 a few weeks ago when Tottenham were on that fantastic run and Harry Kane was absolutely outstanding. They are still doing well, do not get me wrong. But City were nowhere near this.

“When you see City like this, you have to make City favourites. City would be favourites against any team in the Premier League playing like this, maybe Liverpool aside, when you would say it’s 50-50.

“Jose Mourinho, even Tottenham’s players, no one in the country, if City are at this level would think Tottenham are 50-50. I would think it’s more 70-30.

“But it’s a final and it’s compelling – Jose against Pep. I would definitely make City favourites.”

Listen to Gary Neville on The Gary Neville Podcast for more analysis of Man City’s Carabao Cup semi-final win over Manchester United – and what the result means for Ole Gunnar Solskjaer and his side.

Neymar watches his annual five-a-side tournament in his hometown