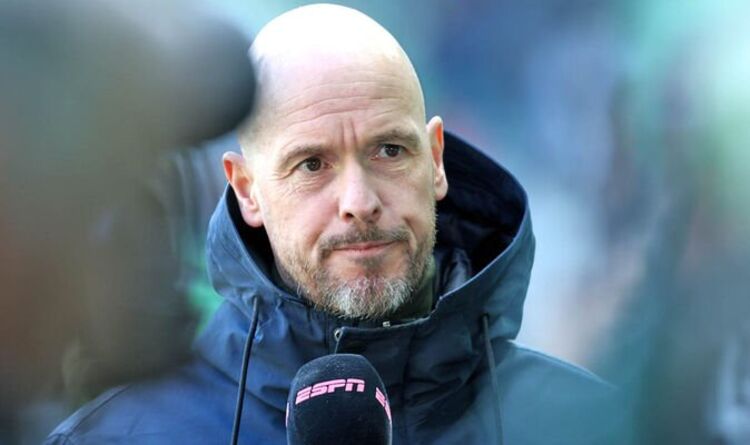 Manchester United are reportedly ‘very close’ to hiring Erik ten Hag as their next manager. The 52-year-old is the favourite to take the role ahead of Mauricio Pochettino, Julen Lopetegui and Luis Enrique after impressing during his interview with Darren Fletcher and John Murtough. So, amid an expectancy the Ajax boss will become the latest man to rule the roost at Old Trafford, Express Sport will now take a look at five players who can become amazing under his guidance.

Injuries have hampered Luke Shaw this season, with the England international recently forced out of 1-1 draw with Leicester over the weekend.

It’s been a disappointing campaign for the left-back, who has occasionally fallen behind Alex Telles in the club’s pecking order.

Yet if United can get Shaw back to the player he was 12 months ago, they’ll be onto a winner.

The former Southampton star was immense under Ole Gunnar Solskjaer last term and also impressed for England at the European Championships.

Nicolas Tagliafico has developed into the complete left-back for Ajax under Ten Hag so, with Shaw, there’s certainly a chance he can get back to the undroppable asset he was during Solskjaer’s time in charge.

There’s no denying Bruno Fernandes has been a huge hit since moving to United back in the January transfer window of 2020.

But the Portugal international remains infuriating at times, with conceding possession one of his biggest weaknesses.

Ten Hag, in stark contrast to Solskjaer, likes order within his teams. Everything is planned, according to his design.

If Fernandes can cut out the errors in his game, and show more composure, there’s every chance he can scale even greater heights.

That’s something that may give Premier League defenders sleepless nights given how good he’s been throughout his brief time in England already.

It just hasn’t worked out for Donny van de Beek in English football so far.

He toiled at United under both Solskjaer and Ralf Rangnick, barely getting a chance no matter how bad results were.

And his struggles have continued at Everton, with the Netherlands international failing to make his mark at Goodison Park.

Under Ten Hag at Ajax, however, Van de Beek was one of the first names on his compatriot’s team sheet – establishing himself as one of the world’s most-promising midfielders.

If Ten Hag takes over, then the 24-year-old is certainly a player who can benefit from any potential appointment.

Yet there’s a sense that a manager like Ten Hag, and the attack-minded style they use, can further benefit the 21-year-old.

Sancho remains a raw talent, even if he’s an expensive one at £73million.

Solskjaer, upon landing the England international, insisted he would give supporters many good times during his stint at the club.

And if United can get Sancho to perform consistently, he’ll play a big role as they look to win a first league title since Sir Alex Ferguson’s retirement in 2013.

Out of all the players at United, Marcus Rashford stands to benefit the most from any new managerial appointment.

The England international was snubbed for the game with Leicester, despite the Red Devils being without Cristiano Ronaldo, Edinson Cavani and Mason Greenwood for the contest.

Rashford’s career has stagnated and Arsenal, Barcelona and Paris Saint-Germain have all been put forward as potential suitors.

Yet he wants to stay at United and help the club become a domestic and European giant once again.

Ten Hag’s attacking philosophy can again aid Rashford, who may become a more prominent member of the team than he’s been during Rangnick’s short time at the helm.

Man Utd news: How much does Ole Gunnar Solskjaer trust his squad?