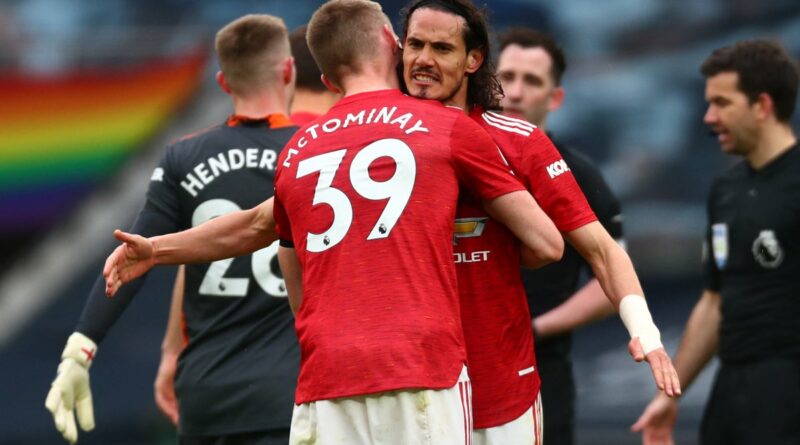 Ole Gunnar Solskjaer has revealed Manchester United are awaiting Edinson Cavani’s decision on whether the striker will remain at Old Trafford for another season.

Cavani headed in Mason Greenwood’s curling cross to give Solskjaer’s side a late lead in their 3-1 comeback win at Tottenham Hotspur on Sunday, the eighth goal of his maiden spell in England at the age of 34.

The Uruguayan, who previously played for Napoli and Paris Saint-Germain, has been linked with a move back to South America at the end of the season and has been separated from his family due to travel restrictions caused by the coronavirus pandemic.

The striker has also been hit by injuries this season which, given his age, may have affected the club’s decision to offer him a new deal, but speaking after United’s 3-1 win, Solskjaer said an offer was on the table with the club keen to extend Cavani’s stay at the club.

“We’re awaiting his decision, if he wants to stay or if he wants to move on,” Solskjaer said. “A performance like today, we as a club have missed for a few years. We haven’t had that type of number nine for a long, long spell.

“Edinson has been working so hard to get fit and now he is getting a couple of games in a short space of time and we can see that the boys played a little bit to his strengths as well.

Solskjaer added: “We have had up front and honest meetings. There’s no secret we want to keep him. I don’t think it’s any secret that this has been a difficult year for everyone.

“With the pandemic, it’s not been possible to have friends over or family over without quarantine. You can’t travel. He’s not been able to experience the fantastic culture in Manchester and in England.

“He is contemplating and thinking hard and long about what he wants to do, and I understand. He knows what we want. I want him at Old Trafford, full Stratford end, scoring a diving header like today. There’s no better feeling.”