Manchester United planned to make Mike Phelan their interim boss before giving the role to Michael Carrick instead, reports claim. Ole Gunnar Solskjaer lost his job as manager on Sunday following his side’s emphatic defeat to Watford. And the Glazers apparently feared a backlash in the aftermath.

Manchester United announced on Sunday that Solskjaer would be leaving his post as manager.

“Manchester United announces that Ole Gunnar Solskjaer has left his role as Manager,” they said in a statement.

“His place in the club’s history will always be secure, not just for his story as a player, but as a great man and a manager who gave us many great moments.

“He will forever be welcome back at Old Trafford as part of the Manchester United family.”

And they also confirmed Carrick would be taking charge, adding: “Michael Carrick will now take charge of the team for forthcoming games, while the club looks to appoint an interim manager to the end of the season.”

However, ESPN have claimed United actually wanted to put Phelan in the dugout instead.

But with the Glazers fearing a backlash, they opted to give the role to Carrick.

United’s hierarchy thought Carrick would get more support among players and fans, having played for the club between 2006 and 2018.

Carrick will today face the media ahead of United’s Champions League tie with Villarreal on Tuesday.

Yet players, the publication adds, are ‘baffled’ by the club’s decision to sack Solskjaer but keep his coaching team in place.

There are said to be fears that the Norwegian’s exit won’t change the club in the short-term because the likes of Carrick, Phelan and Kieran McKenna aren’t good enough.

Carrick has reportedly been given no guidance as to how long his tenure will last.

And it’s feasible he’ll even be in charge by the time Arsenal come to town on December 2.

But Erik ten Hag and Diego Simeone, of Ajax and Atletico Madrid respectively, are also in the frame.

Solskjaer, meanwhile, has described Carrick as ‘top’ ahead of their match with Villarreal.

“As I’ve said to them this morning as well, trust yourselves, you know we’re better than this,” he said.

“We’ve not been able to show it but go out, chest out, enjoy being a Man United player, in the Champions League, on the biggest stage.

“If and when you win the game, you’re through to the next round, Michael [Carrick] is going to be in charge.

“Michael, I have the utmost respect [for], I love Michael to bits. I’m becoming emotional now because he’s top.

“They’ll be fine. I’ll watch them and support them.” 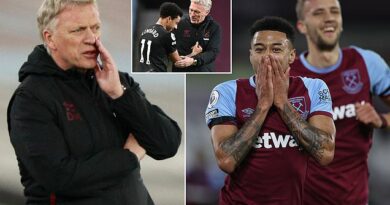