The German side dominated long stretches of the first half, but Mason Greenwood just beat the offside trap with a fine run and finish to give the home side the lead, while Christopher Nkunku’s fierce shot was saved by David de Gea at the other end.

Ibrahima Konate’s header forced De Gea into another save and several half-sights of goal were well-defended by the home side, before sub Marcus Rashford raced through twice to bury finishes and give United the points.

A late penalty was then handed to Anthony Martial by Rashford instead of netting his hat-trick and the French forward made sure it wasn’t a wasted gift for the fourth, before teeing up his English strike partner for his eventual treble.

Here are the player ratings from the match at Old Trafford.

Victor Lindelof – 8. Lots of concentration was called for on the night and he came up with the answers to Leipzig’s constant movement.

Harry Maguire – 7. Like Lindelof, stood up to the challenge with constant clearances and winning the ball aerially when possible.

Luke Shaw – 7. A good battle with Nkunku which went both ways at times, while he was also good on the ball going forward.

Nemanja Matic – 5. Bypassed somewhat by Leipzig moving the ball quickly in the channels. Booked for a raised arm to the face of Forsberg and lucky not to get a second for the same offence after the break.

Fred – 8. Relentless with his running, closing down and making challenges. Vital performance with this midfield set-up.

Paul Pogba – 6. Had a couple of moments where his quality was evident, but much of the game was spent running to catch-up in both directions.

Donny van de Beek – 6. Showed endeavour in tracking back but looked short of sharpness in the final third.

Mason Greenwood – 6. Tremendous run and finish for the opener, but mostly on the fringes of the game.

Anthony Martial – 8. Showed good movement in the channels and almost created a great chance early on. Goal and an assist late in the match.

Marcus Rashford (sub) – 9. Subs don’t usually get the highest rating of the night but he was a stand-out, showing brilliant pace and finishing to seal the win for his team with a hat-trick.

Peter Gulacsi – 5. Couldn’t do anything about brilliant finishes for the goals. Mostly a bystander for the rest of the game.

Marcel Halstenberg – 4. Quietly effective to start, strong in the challenge but didn’t cover across for Greenwood’s goal. Collapsed at the back late on with his team-mates.

Dayot Upamecano – 5. Caught out positionally a couple of times. Excellent in possession to push Leipzig upfield and spread play wide, but easily beaten by Rashford for the third in particular.

Benjamin Henrichs – 4. Didn’t really get the better of Pogba or Shaw down the Leipzig right.

Kevin Kampl – 7. The deepest of Leipzig’s midfielders. Always on hand to protect the back line, add another pressing option and quickly pass forwards.

Dani Olmo – 6. Clever movement to find pockets of space and get a couple of shots away but didn’t really affect the flow of the game.

Angelino – 5. Always the outlet high down the left. Should have done a little better with a couple of shooting opportunities. Stopped nothing defensively.

Christopher Nkunku – 7. Leipzig’s creative hub. Good dribbling and finding space for shots first half, but quieter after the break.

Emil Forsberg – 6. Another who showed great pressing and short passing, but not enough incisive running or goal threat.

Yussuf Poulsen – 5. Hard working as ever but little penetration from the forward and rarely any kind of goal threat. Riled Maguire by going to ground easily. 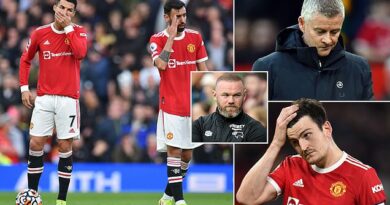