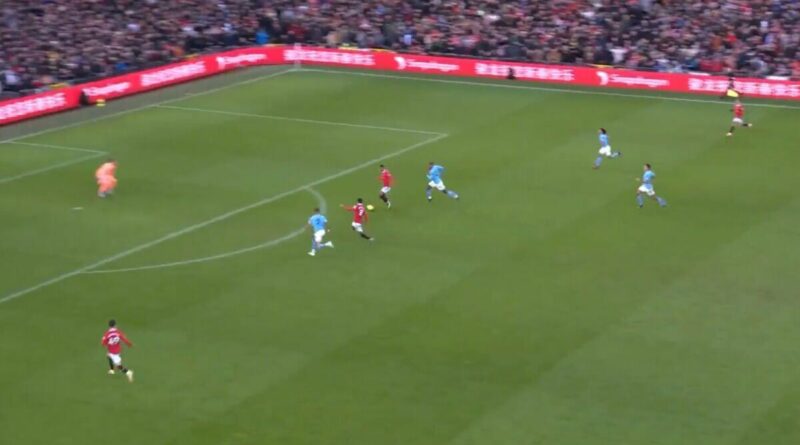 Manchester United forward Marcus Rashford was hailed as “clever” by former Premier League referee Peter Walton after allowing Bruno Fernandes to finish off a fine move against Manchester City on Saturday afternoon. Rashford was in an offside position as the ball was played through to him but moved out of the way as Fernandes placed the ball beyond City goalkeeper Ederson to level the scores at 1-1 with 12 minutes remaining. United went on to win the match 2-1 after Rashford himself got on the scoresheet in the 82nd minute.

After Fernandes had put the ball in the back of the net the offside flag went up, with referee Stuart Attwell going to VAR to check if the goal should stand. And as the goal was being checked, Walton told BT Sport: “Well let’s just say I think this is a goal.

“You’re quite right in saying that Rashford has moved for the ball, hasn’t interfered with the ball, hasn’t played the ball himself. The flag goes up because of the offside position but when VAR look at this and when the assistant discusses this with Stuart Atwell, I think this is a goal.”

Walton was then asked for his opinion for a second time to explain why Rashford wasn’t interfering in play in the run-up to the goal. And the 63-year-old added: “The law was amended to actually counter that argument of whether he touches the ball or does he interfere with an opponent playing the ball. He does neither, so as the law stands he hasn’t done anything wrong – it’s actually very good play from Rashford himself.”

Solskjaer: 'United weren't where they should have been' under Mourinho