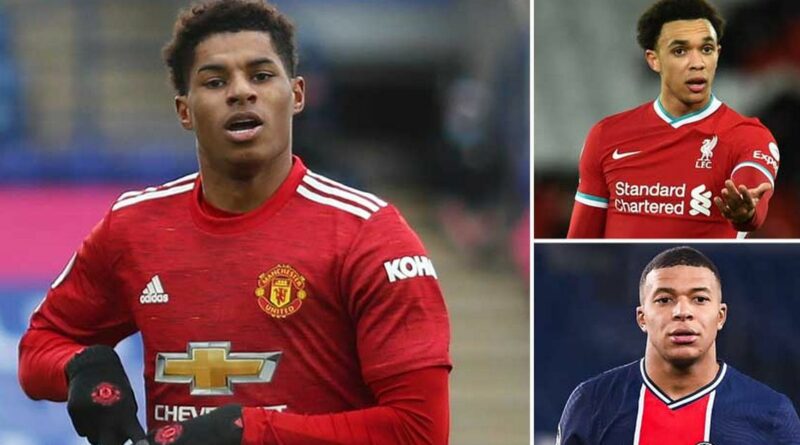 Manchester United ace Marcus Rashford is currently the most valuable player in world football, according to the latest calculations from CIES Football Observatory.

Rashford, 23, is one of Ole Gunnar Solskjaer’s most reliable stars at Old Trafford, scoring 22 goals in 44 appearances for the Red Devils last season.

And the England international has got off to a flyer this term, registering 14 goals in his first 25 appearances of the 2020/21 campaign.

CIES have put together a list of the world’s most valuable players by analysing a number of factors such as recent performances, age, contract length and career progression, as well as the wealth and success of their current club.

Rashford, who has three-and-a-half years remaining on his United contract, tops their list as things stand, having seen his value skyrocket to an eye-watering £150million.

Borussia Dortmund starlet Erling Haaland, 20, is second with a value of £137.3million, a result of his breathtaking form for the German club which has led to 17 goals in 15 appearances this season.

Third in the list comes Liverpool sensation Trent Alexander-Arnold, 22, who is said to be worth £137.1million after playing a crucial part in the Reds’ recent Premier League and Champions League triumphs.

Another Premier League player and Rashford’s Red Devils team-mate Bruno Fernandes is the fourth most valuable player on the planet, with the 26-year-old’s return of 27 goals and 17 assists transforming United’s fortunes over the past year and earning him an estimated £137million price tag.

Paris St-Germain superstar Kylian Mbappe has dropped to fifth in the list after entering the last 18 months of his contract, meaning he is no worth £135million.

The France wonderkid has an identical goal record to Rashford this season, but any potential suitor would be able to land him for a cheaper price with just a year-and-a-half remaining on his deal.

Dortmund winger Jadon Sancho is sixth with a value of £134.1million, coming before Atletico Madrid youngster Joao Felix on £128million.

Euro 2020 dates: When does the rescheduled tournament start and when is the final?