Marcus Rashford has sent a message to Manchester United fans, warning them to take care amid the coronavirus outbreak.

COVID-19 has infected more than 115,000 people worldwide, at the time of reporting, and the first Premier League fixture of the season has been postponed because of the outbreak.

Manchester City's clash with Arsenal, which was due to take place on Wednesday night, was called off as a "precautionary measure".

Tasking to Twitter to warn United fans to stay safe, Rashford wrote: "Football is the fans…period. But the safety and well-being of our fans has to come first. Without you, we're nothing. If you're not feeling well, call 111 for advice."

The Premier League confirmed on the day of the match that Man City's home clash with Arsenal had been postponed.

The decision was made following the Gunners' Europa League defeat by Olympiakos, after it emerged that the Greek club's owner – Evangelos Marinakis – had contracted the virus.

A Premier League statement read: "Tonight's game between Manchester City and Arsenal has been postponed as a precautionary measure following the announcement yesterday that Evangelos Marinakis has contracted COVID-19.

"Thirteen days ago, Olympiakos played at the Emirates Stadium in the Europa League and Mr Marinakis, the Greek club's owner, met with several Arsenal squad members and staff.

"Following medical advice, Arsenal FC and Manchester City FC consider it is necessary to postpone their fixture due to be played this evening to give time to fully assess the situation.

"The Premier League has therefore agreed that tonight's game will be rearranged. 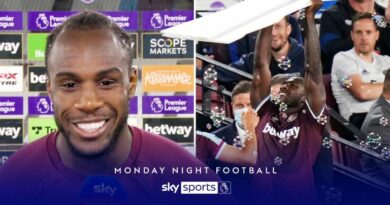 Premier League top goalscorer Michail Antonio issues challenge to rivals: Catch me if you can!