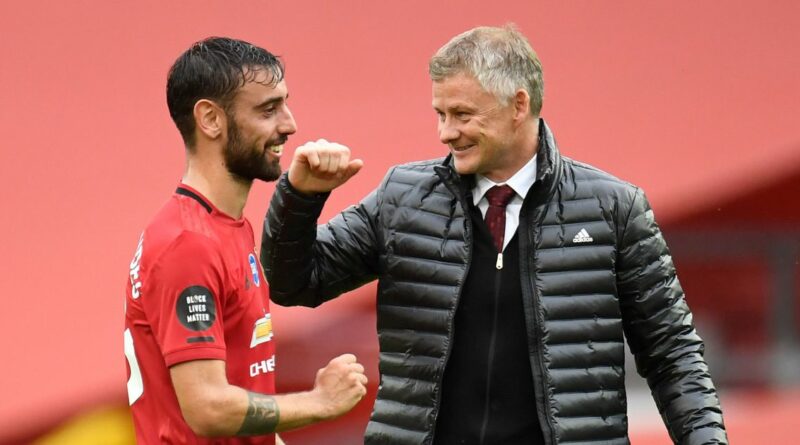 Sky Sports pundit Paul Merson has hailed Ole Gunnar Solskjaer for his ability to get the best out of Bruno Fernandes.

The midfielder has been a large reason behind Manchester United's renaissance this season.

It has seen them fly up the Premier League in recent weeks and they are second, level on points with leaders Liverpool.

It is a remarkable turnaround from the start of the season, when Solskjaer was coming under huge pressure.

And former Arsenal star Merson has commended the United boss for his managerial prowess.

"I would say so (that he was the signing of 2020) and I think it’s great management from Solskjaer for what he’s done," he told Sky Sports.

"He can play whatever way he wants to play. No other Manchester United player can go out and play the way he plays.

"Certain times in games he’s anonymous and other players might get brought off but he can do what he wants.

"The Leicester goal he tries to nutmeg inside his own half, but he plays his own way and I think that’s brilliant by the manager.

"It’s very rare you get that at a big football club that you can have someone told go and do whatever you want to do.

"Try whatever you want to try and if it doesn’t come off you’re alright.

"It’s great management and I think he’s a special player.

"I love watching him play and what I love about him when it isn’t going well he’ll just keep on doing what he’s doing, he won’t hide and that’s what you call brave.

"Brave’s not going into 60-40 tackles against, brave is when it’s not going well and you keep getting on the ball."

Only Mohamed Salah and Heung-min Son have scored more than him in the league with Harry Kane and Kevin de Bruyne the only ones having more assists.