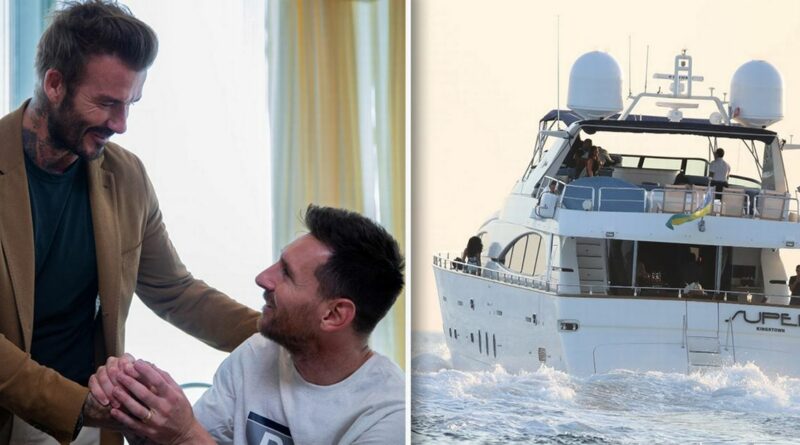 Lionel Messi is reportedly in line to receive shares in David Beckham's Inter Miami which would pocket him enough to buy Floyd Mayweather's yacht.

Messi, 34, has agreed a deal to join the MLS side once his PSG contract expires next year, according to DirecTV, via Marca. It would not only see him join as a player, but also land him a 35% stake in the club.

Inter Miami were valued at between £483million and £524million by Sportico last year, which means Messi's portion would be worth £169m and £183m. The football icon would therefore have the funds to snap up the luxury boat which boxing legend Mayweather spent $200m (£161m) on in 2018.

The 70ft long vessel is complete with several bedrooms, a cinema room and a sizeable swimming pool. Messi already has somewhere to stay if he were to move to Miami, though, as he reportedly purchased a £7.25m apartment in the city last year.

That heightened speculation of a transfer and he's previously expressed his desire to play in America before his career is over. But dad and agent Jorge has shut down suggestions that his son has got the move lined up already.

Where should Messi end his career? Let us know in the comments section.

He told Le Parisien: “Leo has not yet decided on his future. And if Leo Messi has crossed paths with David Beckham in the last few hours, it is only as part of PSG’s stay in Doha where the former English midfielder plays a role as an ambassador for the next World Cup in Qatar."

Messi was pictured with Beckham this week. The ex-England captain, who is co-owner and president of Inter Miami, met up with his former side and posed for pictures with their current stars.

Beckham has made no secret of his desire to sign Messi in the past. He previously said: "Well you know what, we've got great opportunities down in Miami.

"We've been contacted by a lot of different players over possibly coming to join the team. As with any owner, you really want the best players.

"If we have the opportunity to bring in players like Cristiano [Ronaldo] or Leo… I have such admiration for them as athletes, if we could bring those players in then great."

Fellow co-owner Jorge Mas has also hinted at signing Messi, telling the Miami Herald in February: “Leo Messi is still one of the best players in the world, his skills have not diminished.

"I believe, and David [Beckham] has a relationship with him, that if he leaves PSG, at the time he leaves PSG we would love to have Messi as a player at Inter Miami and be part of our community.

"Can it happen? We will push. I'm an optimist at heart – can I see it happening? It's a possibility."

How Arsenal could line up after Upamecano, Guimaraes and Rabiot transfers