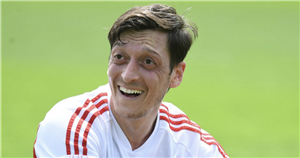 Mesut Ozil has sent a message to Arsenal supporters after leaving for Fenerbahce.

The World Cup winning German midfielder has agreed to end his contract in north London, which was due to expire in the summer.

The 32-year-old, who has moved to Turkey with his wife and daughter, fell out of favour under both Unai Emery and Mikel Arteta having impressed under Arsene Wenger.

Although many have questioned his desire to get back in the team over recent months, his fine record of assists for the club will see him remain in the history books.

“I’d like to thank the club for this amazing journey over the past seven-and-a-half years," Ozil said.

"The support I have felt from the team and fans during my time here has been truly incredible and something I will always be grateful for. Together we won trophies for the first time in years and created memories that will last a lifetime.

The Arsenal fans will forever remain in my heart.

"I’d like to thank Edu Gaspar for helping bring about a professional and dignified solution in the past few days, and I wish everyone at the club the best in their attempt to continue to bring Arsenal back to the top, where we belong.”

The full message can be read below.

"It was a privilege to play alongside him and, more recently, coach him.

"His creativity and vision led to many goals during his time in the Arsenal shirt. Mesut was at the heart of many great moments for this club over the years, including those three FA Cup final wins.

"These successes will always be part of our history. We thank Mesut and wish him all the best with Fenerbahce.”

In total, Ozil made 254 appearances for the Gunners, scoring 44 goals and adding 77 assists, as well as winning the FA Cup on four separate occasions.

He added of his new club: "I grew up as a Fenerbahce fan as a kid in Germany – every German-Turkish person supports a Turkish team when they grow up in Germany.

"And mine was Fenerbahce. Fenerbahce is like Real Madrid in Spain. The biggest club in the country."