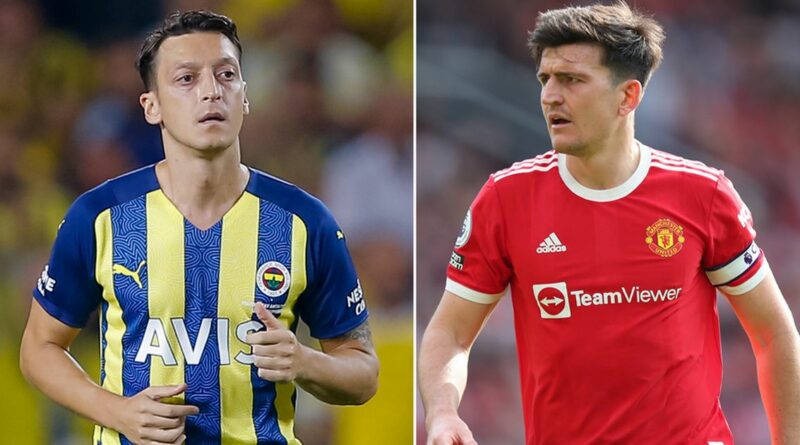 Mesut Ozil has sent a message to Harry Maguire after the Manchester United defender was sent a bomb threat earlier this week.

Maguire was sent an email on Wednesday which claimed a bomb had been planted at his home, leaving him fearing for the safety of his fiancee and their two daughters. Specialist police officers have since carried out two searches at his home and in the surrounding area as well as launching an investigation into the threat.

Former Arsenal midfielder Ozil has now sent a message to the England international as he reacted to the news of the threat on social media.

Ozil tweeted: “Just read the news about Harry Maguire… this is just insane. Football can never ever be that serious to be threatening a player and his family. I'm shocked. Sometimes football brings out the worst in people. Hopefully all people involved get punished.”

Police have taken the threat to Maguire seriously, with sniffer dogs used on the second search of his property as specialist officer checked the area was safe.

Despite the bomb threat, Maguire is determined not to let it force him out of the club, according to The Sun, with a source quoted as saying: “Harry will not be forced out of Manchester United by this kind of threat.

What more must be done to protect players from threatening behaviour? Let us know in the comments section below “His number one priority will always be the safety of his family but he’s also got the strength of character to deal with this. It looks like the work of some cowardly fan. If that proves to be the case, they are an utter disgrace to the name of this proud football club.”

Maguire has been the subject of intense criticism from United supporters in recent months due to his below par performances and the club's poor form.

Fans even launched a position to have the 29-year-old stripped of the captain's armband at Old Trafford earlier this week as they demanded a change at the club.

The former Leicester City man again came under fire after Tuesday's 4-0 loss away to Liverpool, leaving the club sixth in the Premier League with five matches remaining.