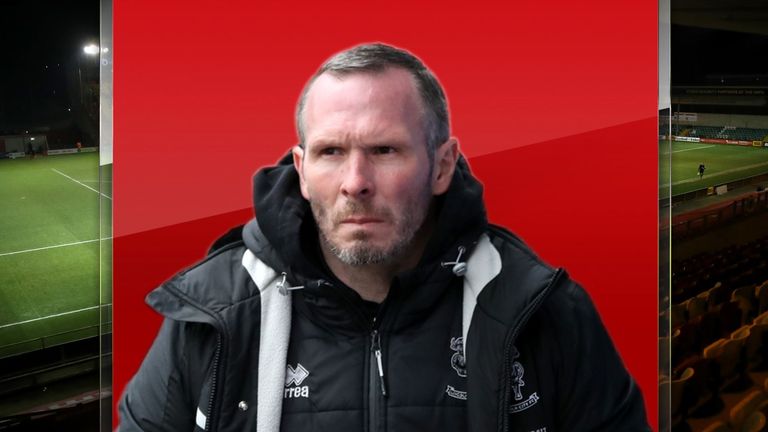 It was during his time as manager of Oxford United that Michael Appleton’s wife Jess came up with the nickname ‘Flatline’ to describe her level-headed husband. “She would not know whether I had won, drawn or lost,” says Appleton, deadpan as ever.

It is easy to see why this 45-year-old Mancunian has learned to take things in his stride. There were the playing days ended at 27 due to injury. The managerial spells at Portsmouth, Blackpool and Blackburn at a time when all three clubs were in utter disarray.

His old boss Sir Alex Ferguson berated him for at least one of those career choices but the Manchester United legend approves of this latest venture. Appleton is one game away from taking Lincoln City into the second tier of English football for the first time in 60 years.

“Lincoln City and the League One playoff final should not even be in the same conversation,” says Appleton.

“Not yet anyway. Maybe two or three years down the line, but not yet.

“The good thing is that my chairman has done my media for me. He has come out and said we have got a bottom-half budget and for us to even be in the playoffs is an incredible achievement.

“The fact that we are one game away from the Championship is pretty special.”

The Imps have already had to see off Sunderland in a dramatic semi-final that tested the nerves. A two-goal first-leg lead was eradicated inside 45 minutes at the Stadium of Light. Appleton’s young team were wobbling but they regained their composure.

“We have got a lot of young players who have never experienced playing in front of crowds, never mind that type of atmosphere. At half-time they could have caved in a little bit.”

The team talk was a big one. Was it the old hairdryer treatment?

“I was pretty cheesed off to say the least. I knew I was in control. I knew what I was saying. I wasn’t just shouting things for the sake of it. As soon as I stopped speaking, they had a couple of minutes to themselves and all of sudden the atmosphere changed.

Tom Hopper restored the aggregate advantage, although Jorge Grant then saw a penalty saved. The result was that Lincoln had to cling on towards the end but they managed it.

It has been interesting for Appleton to take over at a club that had won two promotions under the popular Cowley brothers but was in need of an overhaul. The methods that had worked so well at Lincoln were not proving as straightforward up in League One.

It has taken time to reshape the style and the squad. Relationships have been built, with Appleton selling his vision over countless Zoom calls in a bid to persuade clubs, players and agents that Lincoln is now the right place to develop young talent.

Morgan Rogers arrived from Manchester City, Timothy Eyoma from Tottenham. Brennan Johnson from Nottingham Forest has 10 goals. Lincoln have their own players too with high hopes for Anthony Scully, Tayo Edun, Regan Poole and Lewis Montsma. All 23 or younger.

In time, the plan is sell players on at a profit and create a sustainable model. “Once that starts happening I think the board and the fans will see what we have tried to put in place. To reduce the average age of the playing squad from 30 to 23 clearly takes a lot of effort.

“It has been a massive transformation in terms of the style of play, the size of the squad, the age of the squad. I think we have got a real identity at the club. The exciting thing is that we have been able to do it on next to nothing really.”

There was some short-term pain. Lincoln finished 16th last season.

“We suffered, don’t get me wrong. There were times in games at home where we played a couple of short passes or square passes and there were a few boos and groans and cries to get it forward.

“The last four or five games before the pandemic happened last season, all of a sudden, if we gave the ball away on a switch of play or the ball went out of play because there was a misplaced pass, that stopped happening.”

Halfway through this season, Lincoln were flying. Appleton recalls a 3-0 win away to Gillingham in February that took them three points clear at the top of the table. He looked at his team that day and became convinced they could achieve automatic promotion.

The next month or so proved a struggle as the virus impacted preparations, reaching its nadir prior to a defeat to Oxford in late March as two more players tested positive on the eve of the match, forcing officials to move the visitors’ dressing room to a different area.

“There were a couple of times where I questioned whether we were capable of sustaining it,” Appleton admits.

“There was a big question mark over whether we could stay in that playoff spot.

“We had a good chat as a group and we pretty much said, ‘We have worked too hard to put ourselves in this position, let’s not let it slip.’ We had a fantastic spell of four or five games where we scored goals and kept clean sheets and all of sudden it was game on again.”

With the worst of the coronavirus crisis seemingly behind them, the biggest hindrance to Lincoln’s preparations these days are the Red Arrows fly-bys from their nearby base.

“At first, it is a little bit of a novelty. New signings come in the building and think it is amazing so you have the normal little joke with them, ‘Yeah, because you’re a new signing we asked them to go up and show you what they are about’.

“But after you have seen them four, five, maybe six times, they do become a bit of a nuisance because when you are trying to get a point across they cannot hear a bloody word you are saying.”

Appleton can laugh about it because he has dealt with far worse.

Blackpool await at Wembley, the form team in League One under Neil Critchley and one of his former clubs. It is a place transformed since Appleton’s dismal days in charge.

“I remember going to watch a game after the Oystons had left and the atmosphere was completely different. It was very welcoming, the fans were getting behind the players and now they are in a real good place, a good side, good management staff and looking one way really, and that’s up.”

Blackpool was difficult but Appleton’s early managerial career is littered with such experiences. At Portsmouth, he recalls signing 14 players on the Thursday before the team’s first game of the season. “It was just a crazy situation.”

At Blackburn, he was sacked by a sporting director he has still never met.

“There were things that went on at Blackpool and Blackburn that I probably could not discuss with you. Things that just weren’t right and should not have happened.

“It was a difficult time in my career. That is the only time that people have seen me working in the Championship and you could argue that you could put any of the successful managers in the Championship into those roles at that time and would they have done better? I don’t know, maybe they would. But I would put a pretty good argument up that they wouldn’t.” It was after the Blackburn experience that Appleton received his dressing down from Ferguson, his former Manchester United manager and now neighbour.

“He was right, though, because I took all three of those jobs without doing any due diligence on the people I was working for. Zero. Like, absolutely zero.

“I was just being a young, confident coach who thought he could take on anything.

“The difference now compared to when I first started managing is that I was in a real rush to get to the top as quickly as I possibly could. Now I am a bit more relaxed and laidback and concentrating on the job in hand, what I am doing and how I am doing it.

“If that type of club came up now with those type of owners and those obstacles in my way, I would be able to turn them down.” Appleton took some time out of the game to reassess before returning to win promotion at Oxford and further his reputation as assistant manager at Leicester.

Off the field, he has developed too, completing a master’s in sport directorship at Manchester Met. “I was completely out of my comfort zone,” he says.

“It was a lot of late nights. A lot of 3am and 4am reading to hit deadlines. But the sense of achievement when you pick up a master’s is right up there with winning promotions.”

Another one of those could be just 90 minutes away.

Would even Appleton allow himself to celebrate that?

“There will be no ‘Flatline’ if we win on Sunday, I can assure you of that,” he says.

“You might even get a smile out of me.”

Watch the League One play-off final between Blackpool and Lincoln on Sunday May 30, live on Sky Sports Football from 2.30pm; Kick-off 3pm