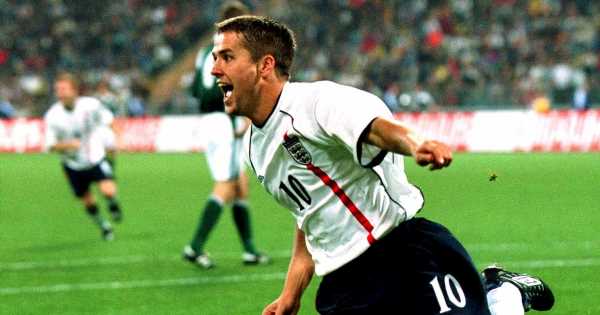 "In the eight years I was Michael's roommate and colleague, I never saw him so animated."

Those are the words of Jamie Carragher, describing not Michael Owen's reaction to watching Rocky – one of only a small number of films the striker has ever seen – but his foul-mouthed rant at half-time of Germany vs England in 2001.

Owen is known as a mild-mannered sort of chap, rarely showing a glimmer of emotion during either his playing or broadcasting days, so it's a bit of a surprise to think of him effing and blinding around the dressing room.

But according to Carragher, that's exactly what happened at half-time in Munich.

With the Three Lions leading 2-1 and needing to win to hold on to keep their automatic qualification hopes alive for the 2002 World Cup, Owen unleashed fury on his team-mates.

Writing in his recent book, The Greatest Games, Carragher says: "Michael Owen rushed into the dressing room like a man possessed, stared wide-eyed into the faces of his teammates and offered a damning verdict on the opposition.

"It was half-time in Munich, and I was one of the substitutes for England’s World Cup qualifier against Germany as Michael channelled his inner Tony Adams."

"In the eight years I was Michael’s roommate and colleague, I never saw him so animated."

Owen's rant might have been out of character – but it worked.

The Three Lions were different team in the second-half and immediately extended their lead when Owen latched onto an Emile Heskey knock-down to make it 3-1.

Little over 15 minutes later it was four as Owen completed his hat-trick.

Steven Gerrard won possession and played in his Liverpool team-mate who sprinted into the box and fired the ball beyond Oliver Khan.

Heskey then made it 5-1 with 16 minutes remaining to seal England's first competitive win over Germany since the 1966 World Cup final and a night that still lives long in the memory of Three Lions fans.