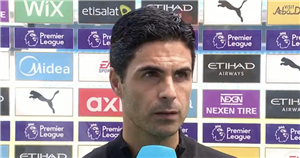 Mikel Arteta has been left “angry” with Arsenal midfielder Granit Xhaka because of the “consequences” of his red card against Manchester City.

The Swiss star was shown a straight red after 35 minutes for a two-footed lunge on Joao Cancelo.

While the Gunners were already 2-0 down, it gave them a huge disadvantage as they went on to concede three more to sit bottom of the Premier League after three rounds.

And Arteta, who now has Arsenal fans calling for his sacking, has vented his fury at Xhaka for getting sent off.

Speaking to BT Sport after the match about the 28-year-old’s dismissal, Arteta said: "I am angry because of the consequences that it had to the team.

“I must say the line we are being judged with is really thin because we had some actions like that in the last two Premier League games and nothing happened.

“I’m disappointed with the second goal, the way they allowed that goal."

Arteta’s side were behind after just seven minutes, with Ilkay Gundogan heading in from close range.

While Ferran Torres scored the second goal from another defensive lapse before Xhaka’s red card and Gabriel Jesus finished from Jack Grealish’s run before half time.

Do you think Mikel Arteta should be sacked at Arsenal? Let us know in the comments section.

Rodri’s drive and the Spanish forward’s second goal rounded it off, leaving Arsenal with no points from three games, no goals scored and nine conceded.

When asked for this thoughts on the game, Arteta added: "Really painful, a lot of things happened in the game to get where we got.

“I think we started the game really really well, and in the first situation they had the ball wide of the box we didn't defend the cross, we defended the run into the box really poorly and we're 1-0 down.

“Then we tried to go again, we created some situations, and we conceded the second goal.

"When you lose games it's impossible [to sell to the fans], but you saw we had 3,000 fans today and the way they reacted to the team and the club with the support they gave, the conditions, that's why we all went to applaud. I am really proud of that.

“I am sorry we could not give the result and we have to fix it."