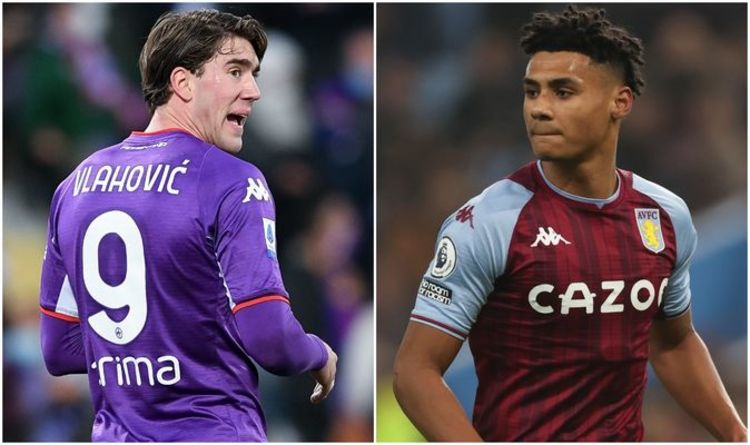 Arsenal are chasing Fiorentina’s Dusan Vlahovic but their search for a new long-term number nine may potentially have to wait until the summer, when the ideal option could open up for them. Vlahovic, Alexander Isak and Dominic Calvert-Lewin are among those being linked with a move to the Emirates with Alexandre Lacazette, Eddie Nketiah and Pierre-Emerick Aubameyang all likely to leave the club in the next six months.

Those three all departing Arsenal would leave only Gabriel Martinelli capable of playing through the middle for Mikel Arteta, with Folarin Balogun not yet deemed ready for a regular role in the Gunners’ first-team, and a new goalscorer is therefore of huge priority in the transfer market.

Vlahovic is the exciting marquee option having scored 33 goals across 2020, with 18 in 21 games so far this season, but will cost up to £70million and is also liked by Manchester City and Juventus. He may just prove elusive.

And while Isak and Calvert-Lewin are credible alternatives, there might be another player even better suited to Arteta’s fluid, fast and exciting attacking team in Aston Villa’s Ollie Watkins.

The Devon-born England international, valued at £31.5million by Transfermarkt, has himself admitted it would be a dream of his play for the north London club.

Speaking at the London Football Awards in March 2020, where the then-Brentford striker was named the EFL Player of the Year, Watkins said: “I’m an Arsenal fan, so Thierry Henry was my [favourite player]. He’s unbelievable to watch. He was the idol growing up really.”

He added: “Yeah that’s the dream to play for Arsenal one day. But it’s a long shot. It’s only because my family support them and stuff like that. But that’s a long-term [goal].”

Given the problems currently engulfing Manchester United, it is important Arsenal bring in the right characters to the club as they look to build on their progress.

Arteta wants a team he can grow into a trophy-winning, and ultimately title-challenging, side but as important as ability on the ball is having the right attitude to handle the ups and downs of the journey along the way.

Arteta needs players prepared for setbacks, ready to fully commit to the cause and hungry for success. Aaron Ramsdale’s impact in the dressing room, having emerged as one of the new leaders behind the scenes since his summer switch, is evidence of such an approach.

And Watkins would be exactly the right kind of character to fit in.

His former Exeter manager Paul Tisdale previously told Sky Sports: “There are so many players out there with great ability who have a bad attitude but Ollie has got everything. He has the ability and he has the perfect attitude. He has the perfect personality really.”

While Brentford boss Thomas Frank similarly said: “He’s a pleasure to work with in terms of his determination, his desire.”

The man who signed Watkins for Villa – Dean Smith – also paid tribute to the forward’s attitude, saying: “He is a hugely determined character who has both the ability and personality to succeed at the highest level.”

Meanwhile England boss Gareth Southgate insists the Three Lions set-up “like the personality” of Watkins, adding of his abilities on the pitch: “We like his pressing, the speed and the runs in behind.”

And it is Watkins’ drive and determination, allied with his intelligence and technical quality, that might just make Watkins the ideal player to lead the attack in tandem with Bukayo Saka, Emile Smith Rowe, Martin Odegaard and Martinelli.

Watkins, who can also play out wide, only has five goals in 16 games this term but scored 14 times in the league last season. His work ethic and movement would seemingly complement Arsenal’s other forwards well and alongside the likes of Saka and Odegaard, he would surely score more freely.

Arteta, per ESPN, is said to be a big fan of Watkins’ playing style and also his ability to operate in several different roles in attack.

Quite how much Villa would demand for the recently-turned 26-year-old is unclear. But if Arsenal can do a deal for Watkins cheaper than it would cost them to sign a player like Calvert-Lewin or Isak, assuming Vlahovic proves out of reach, signing the Villa frontman could prove a dream not just for the man himself, but also for the Gunners.