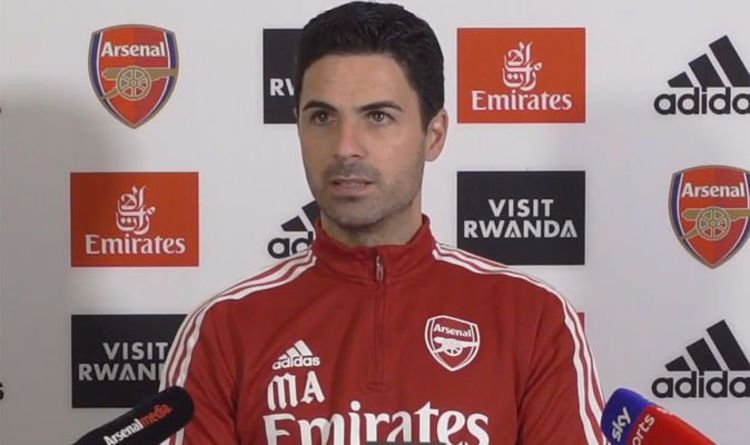 Arsenal boss Mikel Arteta has spoken out on the future of two first-team players whose contracts are expiring next summer. Alexandre Lacazette and Mohamed Elneny have both entered the final year of their deals at the Emirates. The pair have struggled for game time this season, though Lacazette has played a more prominent role in recent weeks.

Elneny has fallen further down the pecking order following the arrival of Albert Sambi Lokonga in the summer.

Ainsley Maitland-Niles has also emerged ahead of Elneny in the midfield options for Arteta.

Arsenal are unbeaten in their last 10 matches in all competitions ahead of Saturday’s trip to Liverpool.

JUST IN: Man Utd blow as Zinedine Zidane has ‘pretty much agreed’ his next job

Speaking in his pre-match press conference, Arteta was asked about the futures of Lacazette and Elneny.

On Lacazette, Arteta said a decision would not be made until the end of the season.

That would mean the Frenchman can speak to foreign clubs in January regarding a free transfer next summer.

“I don’t know there is so much stuff,” the Spaniard said on Lacazette.

“What I can say is I’m really happy with what Laca is doing.

“We’re not going to be talking about any of that until the end of the season.”

Arteta was also coy on the future of Elneny but insisted he was happy with the Egyptian.

He added: “Again I cannot go into that. I’m really happy with Mo.

“I will not be discussing the individual fates of the players as it’s not the time to do so.”

Arsenal face a huge test to keep their unbeaten run going on Saturday when they face Liverpool.

Jurgen Klopp’s side could be without several key players due to injury.

But Arsenal are also sweating on the fitness on a few first-team players.

Arteta said that was not pre-planned and the striker will be assessed before Saturday’s match.

He said: “No it wasn’t pre-planned. We had to assess him and see how he is and make decisions.

“We have a lot of players who have been through different game issues.

Meanwhile, Thomas Partey missed Arsenal’s 1-0 win over Watford before the international break due to injury.

And Arteta said the Ghana star has not yet done enough to prove he can start at Anfield.

“He couldn’t play for the national team,” Arteta said of Partey.

“He really tried to do that and pushed for that one but wasn’t enough. Again that’s something we have to assess because until today he hasn’t done enough.”

Ex-Fulham and Middlesbrough star Amorebieta sent off for biting opponent