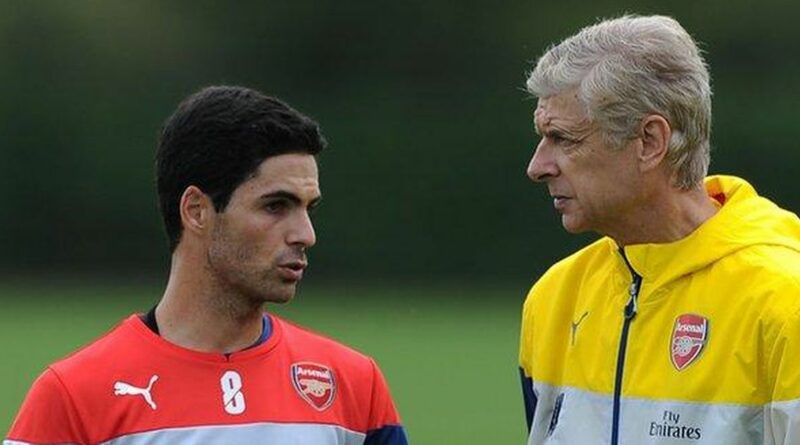 Arsenal boss Mikel Arteta was always destined to become manager of the Gunners one day, as it's been revealed that he was known as 'Wenger's son' during his playing days at the club.

Arteta was signed by Arsene Wenger in 2011 and spent five years at Arsenal before retiring in 2016, but he was back at the Emirates soon after, taking on the role as head coach in December 2019. The Gunners have struggled in the wake of Wenger's departure, but Arteta is leading the rebuild, and top four is still possible this season.

There will never be another manager quite like Wenger, and Arsenal is certainly a different place without their most successful boss of all-time. But perhaps Arteta is more like the Frenchman than first thought, as former Arsenal star Emmanuel Frimpong told Daily Star Sport that he was known as 'Wenger's son' around the training ground back in the day.

Arteta was a well loved player at Arsenal well before he stepped into the dugout. But his transition from player to manager came as no surprise to former Arsenal star Frimpong, who knew that he would one day be in Wenger's seat.

Frimpong spoke exclusively with Daily Star Sport courtesy of BoyleXtra and said: "No surprise, he was the type of person that I knew would be manager one day as he never stopped, never stopped learning. I remember we used to call him 'Wenger's son' because every time we would go out on the training ground he would be there with Wenger talking.

"He was always asking him questions and he was someone that wasn't afraid to ask and learn. It's no surprise that he has become a manager to be honest."

"I remember sometimes in the gym he would come and tell you 'you shouldn't be doing it like that you should be doing this'. I used to think 'who is this guy? A manager or a player?'

"As a youngster you think like that because he'll be telling you 'do this do that' and sometimes to be honest it was quite frustrating. But it tells you the type of character Mikel was, he always wanted everything done to perfection."

HAVE YOUR SAY! Where will Arsenal finish this season under Mikel Arteta? Comment below

Frimpong developed a close relationship with Arteta, as he was promoted to the first-team as the Spaniard arrived from Everton. The pair even started together against Swansea as Arteta made his debut in midfield, as both began to find their feet.

"I remember his first game for Arsenal," Frimpong said. "I think we played against Swansea and I started in midfield with him, actually. We played together and we won that game, I think Arshavin scored. So we played in his first game and he was a cool guy, a very cool guy.

"Didn't talk a lot, always very focused and was one of the first people out there in the training ground so he was very professional. I have a very good relationship with him. Nothing bad to say about him at all."

Frimpong also opened up on his relationship with Wenger, and recalled a time where the Frenchman got angry at him during his early years at the club. "He was different to me because I was very loud and very talkative and he didn't enjoy my jokes sometimes," Frimpong said.

"I used to crack jokes and he would smile but he didn't really talk much, and it was always hard to know what he was thinking because he never talked. But I do remember one time he did get very angry with me and that was the first time I ever saw him like that.

"I don't remember what I did but I do remember him being very mad with me, and everybody was very surprised. But he was a very good manager and he certainly knew what he wanted and how to win games."