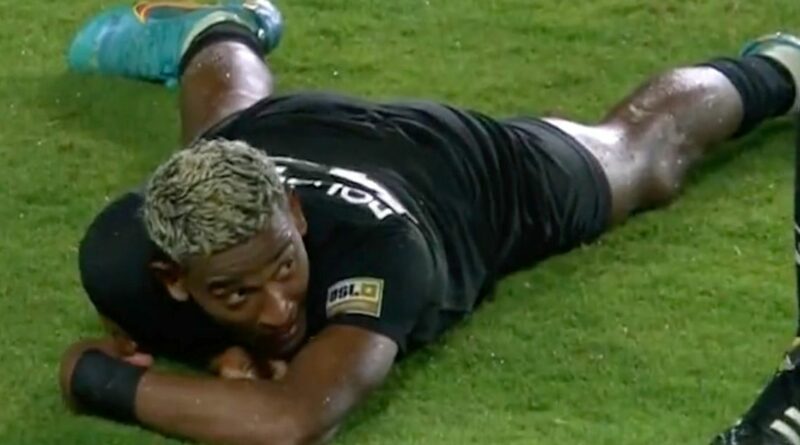 MLS star Douglas Martinez was caught going full David Luiz after the Sacramento Republic forward was seen peeking towards the camera when rolling around on the floor.

2-1 up in the Lamar Hunt US Open Cup Martinez, 25, was adjudged to have fouled LA Galaxy defender Nick DePuy by hauling him back but bizarrely ended up on the deck, clutching his face following a coming together. The Honduras international managed to complete a full five rolls before stopping to see if the foul had gone his way, while DePuy confronted him on a clear lack of sportsmanship.

The move was reminiscent of David Luiz's infamous smile against Manchester United, when the Chelsea centre-back raised a wry grin at the Old Trafford crowd after compatriot Rafael da Silva was sent for an early bath.

Luiz might be a Premier League and Champions League winner but is well remembered for his contentious antics against the Red Devils back in 2013.

Time wasting in the 90th minute, while a goal to the good, Luiz fell to the floor after being booted in the back of the leg by compatriot Rafael da Silva.

HAVE YOUR SAY! Should the FA be doing more to tackle diving? Let us know in the comments section.

The Man Utd defender was rightfully given his marching orders, though Luiz added insult to injury by cheekily grinning at the Old Trafford faithful near the touchline.

Just like Luiz's antics nine years ago, Martinez's insane theatrics have caused a stir on social media with several fans asking for more to be done to prevent simulation in the MLS.

"Can we see a red card here, please, @MLS @PROreferees? Until we see a clamp-down on cheats, simulation will continue to blight our game," tweeted one fan. "There are dives and then there is whatever this is…" commented another.

"Douglas Martinez should have been given a yellow card for this. He committed a foul then proceeded to embellish, it's on the match official to act accordingly," stated a third. While a fourth jibed: "We've finally found Neymar's match."

Carlo Ancelotti admits he is under pressure to succeed at Everton