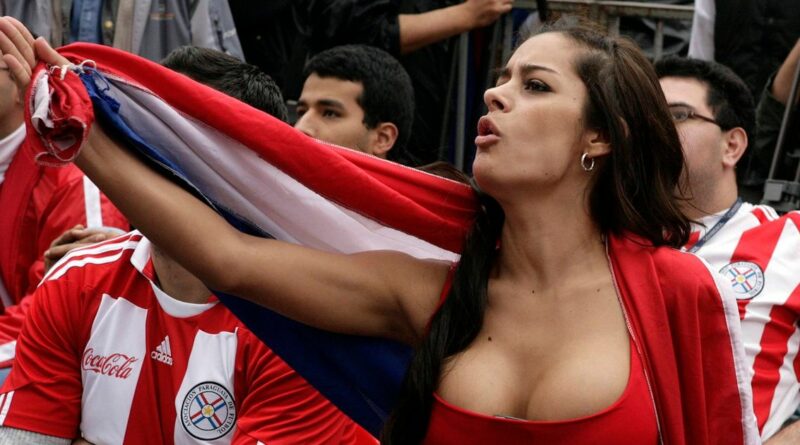 Paraguayan model Larissa Riquelme once stripped naked for a photoshoot after making a promise to fans.

It followed the late Diego Maradona’s own pledge in 2010 where he swore he would strip naked if the Argentina side he was managing at the World Cup won the tournament.

Riquelme – not the Villarreal legend – decided she would match Maradona’s pledge and treat fans in a similarly courageous fashion if Paraguay were to win, however unlikely that would be.

But as Paraguay crashed out of the South Africa World Cup and millions wept, the model took to the studio where she posed naked surrounded by a Paraguay flag.

Paraguay was knocked out in the quarter-finals by Vincente del Bosque’s dominant, tiki-taka-loving Spain side, who won courtesy of a late David Villa goal.

Spain went on to win the competition – their second major tournament in a row – but Riquelme remained intent on fulfilling her pledge despite Paraguay’s failure.

She said: “It will be a present to all of the players, and for all the people in Paraguay to enjoy,’ she said.

“They tried as hard as possible and gave it their all on the field.”

Do you think Messi and Argentina will finally win the Copa America this year? Let us know in the comments section.

Paraguay were recently knocked out of the Copa America in the quarter-finals by Peru, who held the side to a 3-3 draw before winning on penalties.

The country has yet to win an international tournament since 1979 but came close after reaching the final of the 2011 Copa America.

Meanwhile, Lionel Messi is set for one final attempt at winning a trophy with Argentina on Wednesday where he faces Colombia in the semi-finals of the competition.