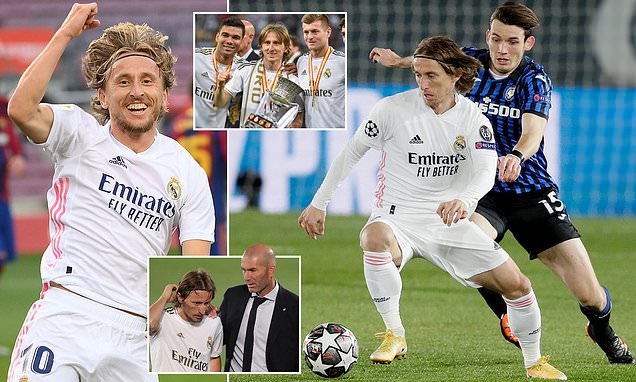 PETE JENSON: Luka Modric says he feels 27 and he looks like he could play for YEARS… at 35 he’s Real Madrid’s golden oldie and his latest Champions League heroics showed just why they love him

It’s now been eight years since Luka Modric’s goal at Old Trafford for Real Madrid made the club’s hard to please supporters say to themselves: maybe we really do have a player here.

Those eight years have been trophy-laden with four Champions Leagues and a Ballon d’Or included, and on Tuesday night against Atalanta the 35-year-old in the last year of his contract looked as if he could play for many more years.

That game against Manchester United in March 2013 seems like another lifetime for Modric. Madrid had drawn the first leg 1-1 – a bad result to take to Old Trafford. When Sergio Ramos put through his own goal in the return it looked as if Sir Alex Ferguson’s side would be knocking out Jose Mourinho’s team. Modric wasn’t even on the pitch. 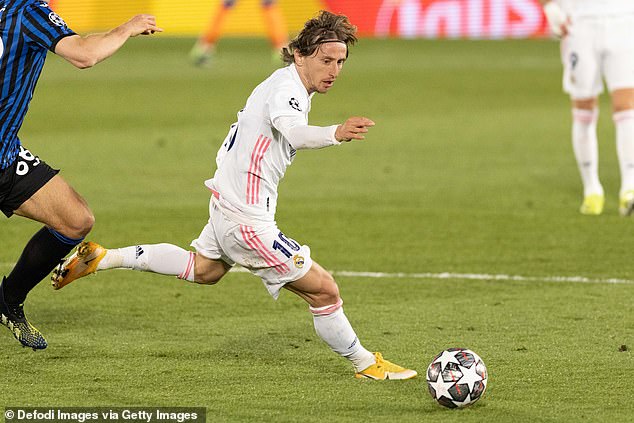 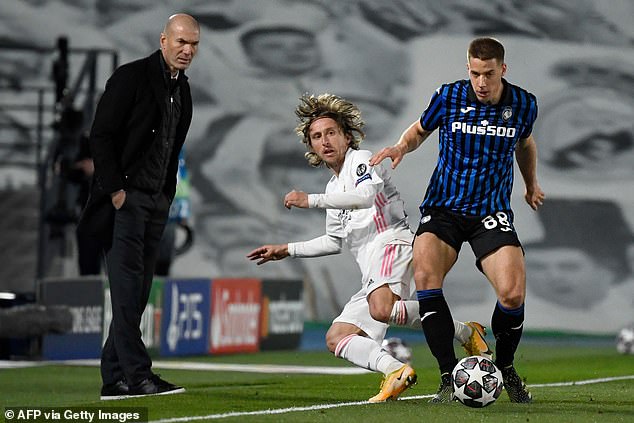 He had arrived eight months earlier on Mourinho’s insistence for €35million but was yet to totally convince and had started as a substitute. When he replaced Alvaro Arbeloa on 59 minutes, everything changed both on the night and in his career.

His goal from the edge of the area on 66 minutes put the tie back on level terms and when Cristiano Ronaldo scored two minutes later Real Madrid were through.

They were beaten in the semi-final by Borussia Dortmund and Modric’s sponsor Mourinho left the club, but in the next five seasons Real Madrid would win the Champions League four times.

On each occasion he would be fundamental – never more so than when he put a 93rd-minute corner on Ramos’ head to take the first of those Champions League finals into extra-time and help win the club their elusive 10th European Cup. 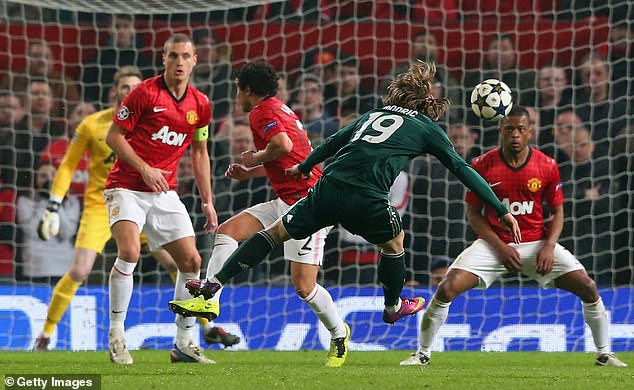 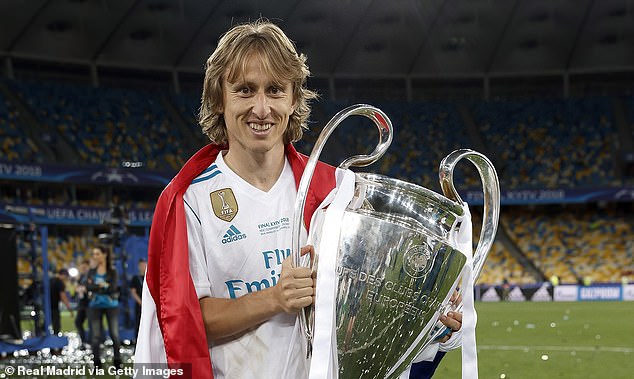 He is loved by Madrid officials, who feel the midfielder has had a huge role in their success

It’s no wonder he is adored by Ramos and by directors who said the pair – plus Marcelo and Ronaldo – were the pillars on which those four Champions League successes were built.

‘I don’t know how far we could go this time,’ Modric said after the win over Atalanta. Everyone left in the competition knows that what Madrid lack in pazazz with Eden Hazard permanently injured, they make up for in class, toughness and experience – Toni Kroos and Karim Benzema are two others who know what it is to be a multiple winner in the competition.

Modric admitted in that post-match interview on Tuesday night that, physically, he feels about 27. His body seems to be paying him back for years of diligence and discipline. He has a reputation in training for being fiercely competitive to the point of being a bad loser in the most low-key of practice drills.

He once told El Pais in an interview: ‘I never relax because if you relax in football your level drops and it can be difficult to get back to it. I’ll be like that until the day I retire.’ 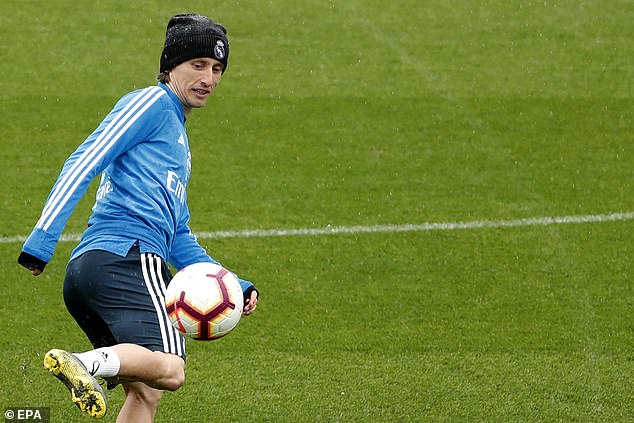 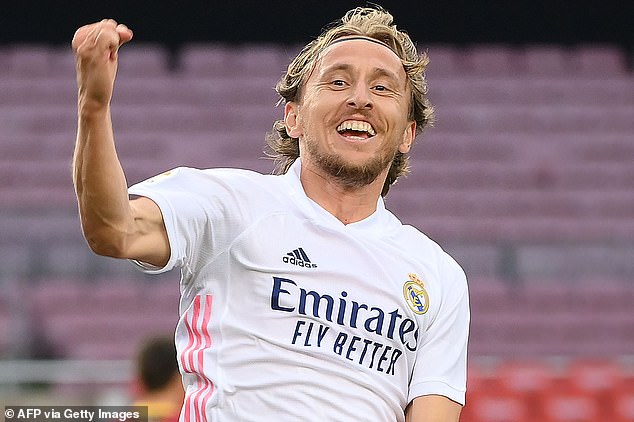 When he arrived from Tottenham, and despite La Liga’s reputation for being less physical than the Premier League, he decided that was the side of his game he had to improve and he hired a personal physical trainer to work with before and after team training.

There is no need for quite that level of intensity anymore with rest as important as extra sessions, but he remains impossible to knock off the ball, firmly planted down into the ground with calf muscles not seen at the club’s Valdebebas training ground since the days of Roberto Carlos.

Former Real Madrid player and sporting director Pedja Mijatovic is a close friend and he has always maintained that Modric’s levels of professionalism will keep him playing for years to come. So how long can he go on? 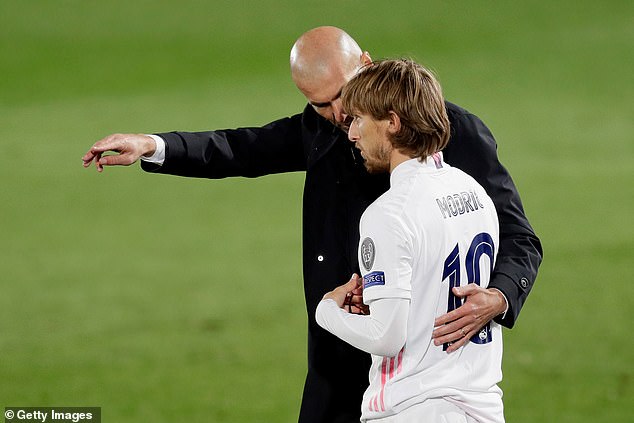 He has a deal in principle to remain with Madrid for another season, with Zidane desperate not to lose the star Croatian

We could be entering the era now of the late-thirties top player. Despite not progressing in the Champions League this year Ronaldo, aged 36 and Messi aged 33 are still top scorers in their domestic leagues.

If the trend continues then make Modric one of the favourites to become a trailblazer. For now it’s one year at a time. He has agreed in principle a new deal with Real Madrid that will keep him at the club until the end of next season.

They are glad to have him, and for all the times he has helped take the pressure off him this season, Zinedine Zidane wouldn’t swap him for any other midfielder.