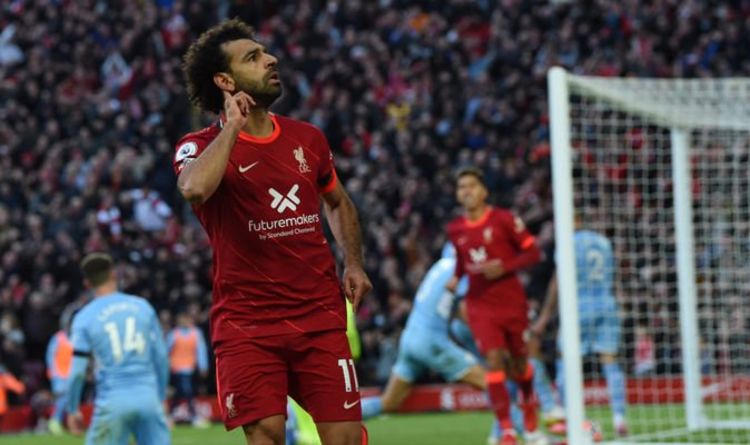 Liverpool star Mohamed Salah staked his claim as the Premier League’s best player on Sunday as he capped off a fine move with a superb solo goal – but holds regret over the strike as it wasn’t good enough to win the game in a 2-2 draw with Manchester City.

Salah picked the ball up with his back to goal on the right-hand side of the pitch with three Manchester City players around him, being pressured into a gully with no obvious escape route.

But after finding space, Salah took the ball past four players before shifting the ball onto his right foot and lashing it across goal past a hapless Ederson – leaving the Brazilian bewildered, neutrals in shock and Liverpool fans in a state of worship and awe.

It hasn’t been the only time their Egyptian winger has been capable of producing moments that are simply out of the ordinary.

Having won the Puskas award four years ago for a beautifully curled shot at home to Everton in 2017, alongside various other long-range efforts including howitzers against Chelsea and Roma, if anyone was going to do it Salah was.

But the lightning-quick forward has gone on record to show his regret at the goal as it didn’t count for a winner in the title clash at Anfield.

Kevin De Bruyne’s deflected effort past Joel Matip just five minutes later ensured that the points were shared on Merseyside – with City probably deserving of a point for their overall performance.

But speaking to the press afterwards, Salah showed his dismay at his wondergoal counting for just a point.

“I have to watch it to see,” said Salah.

“I do remember it a bit. It would be a bit more special if we win the game but it is the result, it’s a good goal but nothing much to say.”

Pep Guardiola’s City side were extremely unfortunate not to be leading at the interval, with massively sustained periods of pressure as they besieged the Anfield Road end.

But their lack of a striker and Ilkay Gundogan’s late presences in the area were telling as they lacked any sort of firepower up front.

And Salah almost made them pay with his sixth goal in seven games – although he believes a draw between the two is fair.

“Yeah [draw is fair], I have to be fair,” Salah told Sky Sports when asked if a draw was the right result.

“They had a lot of chances, kept the ball a lot. I wish I could say no, but it’s fair to say yes.

“They had a lot of chances and a draw is a fair result for both.”

‘There has been pain’: Mauricio Pochettino on how football can help people move past coronavirus