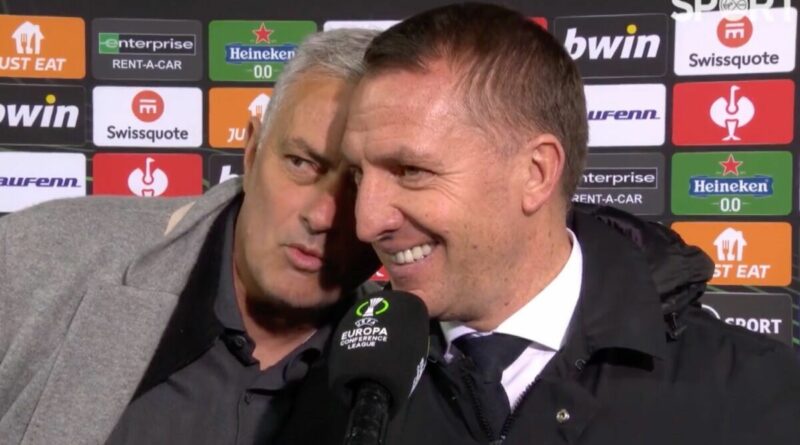 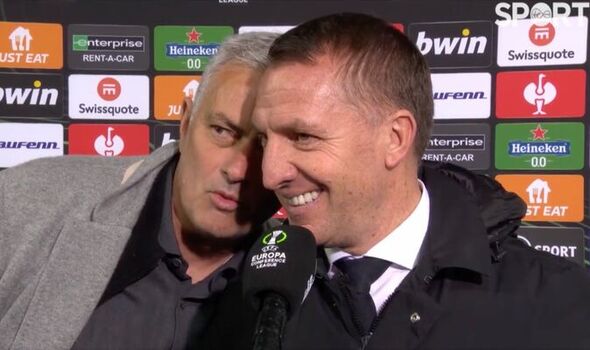 Jose Mourinho gate-crashed Brendan Rodgers’ post-match interview in order to thank him for expensive wine which left the Leicester City boss “crying”. The managers enjoyed the playful exchange in the wake of their two team’s Europa Conference League semi-final first leg, which saw the Foxes play out a 1-1 with Mourinho’s Roma at the King Power Stadium.

Lorenzo Pellegrini opened the scoring for the visitors, drilling home from close range, before a Gianluca Mancini own goal meant the two side’s were left to settle for a stalemate. Shortly after the full-time whistle, Rodgers was conducting a post-match interview when his former Chelsea mentor Mourinho interrupted proceedings in order to thank the Northern Irishman for his hospitality.

The Roma boss declared: “He gave me the best wine on the market!” In response, an amused Rodgers replied, “It cost a lot of money!” before the pair burst into a fit of laughter.

Mourinho later elaborated on his comments, playfully adding: “Brendan Rodgers bought me the best, most expensive bottle of wine. He was crying because it was so expensive. I don’t know how he found it…”

Thursday night was the latest meeting between the two manager’s who continue to share a close bond having worked together at Chelsea. Back in 2004, Mourinho invited aspiring coach Rodgers to join him at Stamford Bridge and work in the Blues’ academy.

The pair will once again be reunited next Thursday as Roma host the second leg of the semi-final tie at the Stadio Olimpico. Reflecting on this Thursday’s encounter, Mourinho admitted he felt a draw was a “fair result” before going on to express his disbelief at the quality of the two sides on show for a Europa Conference League semi-final.

“I think in the end, maybe it’s a fair result,” the Portuguese manager told BT Sport. “They had more of the ball, they had more attacking waves, but we knew that. Everybody knew that. We were organised, we defended very well.

Whichever team emerges triumphant from next week’s second leg in the Italian capital will face either Feyenoord or Marseille in the competition’s final at the Arena Kombetare in Tirana, Albania on May 25. The Dutch side head into the return leg with a 3-2 advantage over their French opponents.