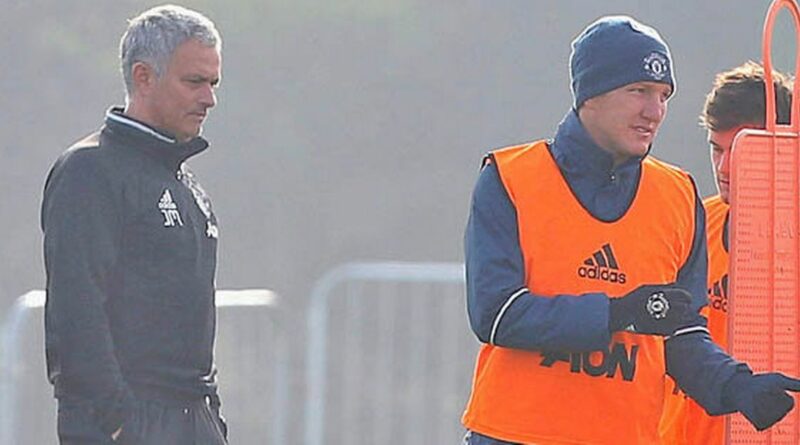 Bastian Schweinsteiger has claimed Jose Mourinho froze him out at Manchester United because he played under Pep Guardiola earlier in his career.

The German international called time on his 13-year spell at Bayern Munich to join United in 2015, with former manager Louis van Gaal initially bringing him to Old Trafford.

When Van Gaal was sacked a year later, Mourinho arrived as his replacement and Schweinsteiger, who had made 31 appearances in his debut campaign, was cast to one side.

He was only afforded four appearances by the Portuguese, none of which came in the Premier League, meaning in March 2017 he chose to leave and join MLS club Chicago Fire.

And opening up on his United exit, Schweinsteiger has accused Mourinho of cutting him out of the picture because of his previous work with Guardiola – while also claiming his "direct" playing style drove Zlatan Ibrahimovic out of the club.

"I didn't play a lot [under Mourinho] unfortunately, but I still respect him," the ex-Bayern ace told BBC Radio 5Live.

Do you think Bastian Schweinsteiger has a point? Let us know in the comments section below.

"He's a great manager who has won a lot of trophies. It was a weird and difficult situation, he never really explained to me why [I didn't play].

"It was maybe because I played under Pep Guardiola and had played Pep Guardiola football, which he doesn't like so much, I think.

"Still, I also liked how Mourinho was, actually, coaching.

"Of course the game style is different – I think that is why Zlatan left. It was not so much football, sometimes it was more direct. But he had success with his teams. It was just a strange feeling."

Schweinsteiger spent two years working under Guardiola at Bayern before sealing a move to United, winning two Bundesliga titles and the DFB-Pokal together in Munich.

He had previously won six Bundesliga titles, as many DFB-Pokals and the Champions League in his iconic stint at the Allianz Arena.

After leaving United just under five years ago, Schweinsteiger enjoyed a three-year spell in America with Chicago Fire before eventually announcing his retirement in October 2019.