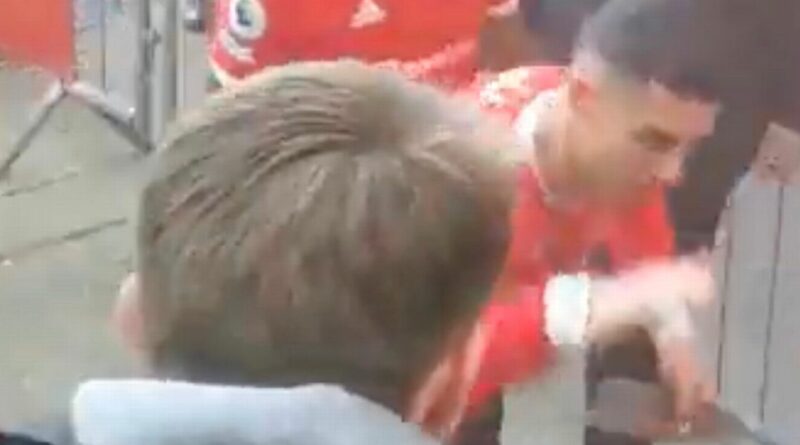 The mum of the 14-year-old boy who appeared to have his phone slapped out of his hands by Cristiano Ronaldo has turned down the superstar's invitation to Old Trafford.

Footage seemed to show the Portuguese forward hitting the phone out of the Everton fan's hands when leaving the pitch at Goodison Park on Saturday lunchtime. Jake Harding was at his very first game, and his mum shared photos of bruises on his hand.

Ronaldo later apologised on Instagram, and he invited the family to Old Trafford. But Sarah Harding has now blasted Manchester United's handling of the situation when speaking to the Liverpool Echo: "United have handled it terribly, and it's just made things even worse, to be honest."

She added: "The way I see it is, if someone assaulted him in the street and then asked us to go around for dinner, we wouldn’t. Just because he’s Cristiano Ronaldo, why would we do it? It’s like we owe him a favour, but I’m sorry, we don’t.

In a statement, the Police said: "Following an incident at Goodison Park on Saturday 9th April, we are working with Everton Football Club and have been in touch with the boy’s family.

The matter is under investigation and we are gathering information. Our enquiries remain ongoing at this time.

Sarah added: "Everton, it’s the People’s Club and they haven’t half come through for Jake. It’s really cheered him up this afternoon. It was lovely to see because something nice has come out of something horrible.

"He just broke down in tears when I told him what Everton were going to do for him. He just said ‘that’s why I Iove the Blues’."

Sarah also told Sky News: "Why should I travel to Old Trafford? Why would 'a Blue' want to go to [visit] 'a Red'?

"If he was genuine, I think he should have turned around at the moment of the incident, picked Jake's phone up and been like, 'I'm sorry.' That was the biggest laugh for me: 'sportsmanship'. When you can do that to a 14-year-old boy. That's not sportsmanship at all."