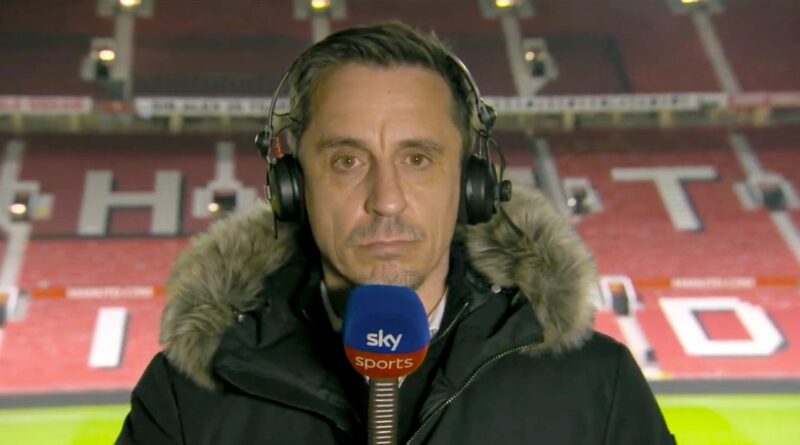 Gary Neville was less than impressed with the way Manchester United played against Leicester, branding them "pathetically slow".

The former right-back was sitting alongside Martin Tyler in the gantry commentating on the match at Old Trafford, which saw his old club drop more points. The Red Devils are battling for a Champions League position but they slipped further behind their rivals with a 1-1 draw against Leicester.

United looked dreary as Ralf Rangnick named a strange team to face Leicester with Cristiano Ronaldo and Edinson Cavani injured. Marcus Rashford was left on the bench and Bruno Fernandes started as striker.

But it did not work at all with the home side failing to muster any real danger on goal with Rangnick's audacious tactics failing to come off. And it sparked some fury in Neville, who watched on and said he could not believe the line-up that was named.

On Rashford not starting, he said: "It’s quite incredible. You’d have thought given he was training every single day that United would’ve been in over the past two weeks.

"You’d have thought he’d have got into the team but it’s surprising to see him sat in between Jesse Lingard and Phil Jones on the bench. He should be in this team. United are absolutely toothless. It's pathetically slow."

United did spark into life after the break but only after Leicester had gone a goal up through Kelechi Iheanacho when he scored James Maddison's sumptuous cross. Fred was the unlikely saviour when he poked in a rebounded shot.

That was about it, though, from the Red Devils who failed to capitalise on the switch in momentum. If anything, Leicester can feel aggrieved not to have landed all three points when Maddison had a goal chalked by VAR for a foul in the build-up.