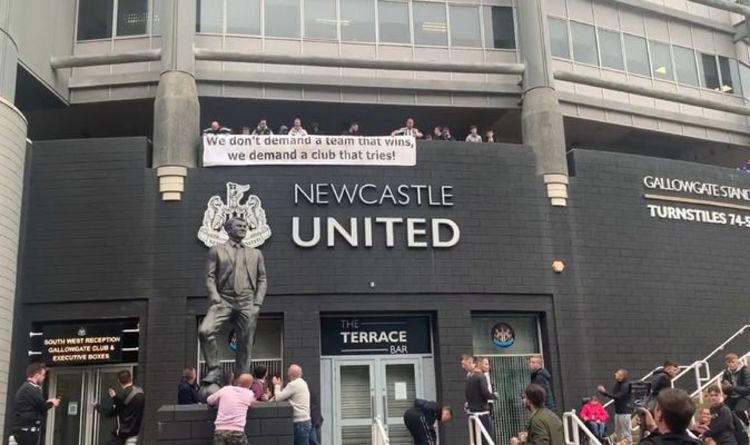 Newcastle fans have displayed a scathing banner at St James’ Park voicing their dissatisfaction with their prospective Saudi-led takeover. The £300million deal, which is set to make the club ten-times richer than Manchester City and PSG combined, is set to completely transform the club.

Major headway was made in the takeover bid on Wednesday when a long-running dispute between Saudi Arabia and Qatar-based beIN Sports was finally resolved.

BeIN Sports have a lucrative deal to broadcast Premier League football in the Middle East, creating a conflict of interests with Saudi Arabia’s potential involvement in the division.

However, the Saudis have taken steps to resolve the dispute which has catapulted the seemingly dormant takeover bid back into action.

Mike Ashley, who initially thought he had sold the club back in 2020, could soon be on his way out of the north east, and fans will be happy to see the back of him.

Ashley was generally felt to have neglected the club, failing to spend the kind of money required to keep pace with the Premier League’s big hitters.

Although his exit will undoubtedly be celebrated, not all fans will be happy to see the front of those now taking the reins.

Those in attendance gradually broke into a round of applause at the message, clearly feeling that the identity of their club may soon be in danger.

The reaction comes as yet another obstacle was cleared in relation to the takeover, with the Saudi Arabian state legally guaranteeing ‘separation’ from their day-to-day control of the club.

That was thought to be the last remaining stumbling block according to The Times, and an announcement is expected soon.

Naturally, with big investment comes big changes, and the Magpies could soon be among the very wealthiest clubs in world football.

They will still be bound by Financial Fair Play regulations, or whichever reform comes afterwards, but new signings and major adjustments will surely be on the horizon.

That could dramatically transform the club’s fortunes in terms of fighting for silverware, European accolades and the world’s best players – but as the banner says, they ‘do not want a club that wins’.

Ashley could certainly be accused of not trying, however, which leaves those fans stuck between a rock and a hard place.

Newcastle have spent decades upon decades building a community-based club, so it is understandable why some are fearful of such radical change.

Glenn Hoddle says Gareth Bale is getting back to his best