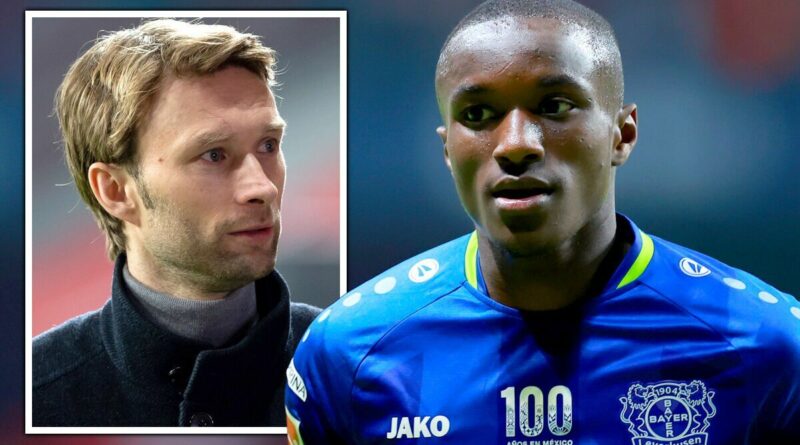 Newcastle have been told they can forget about signing Moussa Diaby this summer as Bayer Leverkusen plan to keep the highly-coveted 22-year-old Frenchman “for as long as possible.” In an exclusive interview with Express Sport, the Bundesliga club’s director of sport Simon Rolfes confirmed that Bayer simply have no plans in place to sell any of their most-prized assets before the start of the 2022/23 campaign, as they strive to build on their impressive third-place finish after securing the return of Champions League football.

Diaby was at the heart of that, registering a statement 17 goals and 14 assists in 42 appearances in all competitions to capture the interest of the world’s richest club Newcastle, among other potential Premier League suitors and the player’s boyhood club Paris Saint-Germain.

The ambitious, big-spending Magpies were anticipated to initiate talks with Bayer in the coming weeks following the conclusion of the international break amid Tottenham’s surprise interest in Allan Saint-Maximin.

However, retired Germany international Rolfes has now categorically laid on record that £60million-rated Diaby is considered untouchable, suggesting there is no figure that would alter Leverkusen’s stance on a sale this summer.

When quizzed on whether Bayer had received any formal proposals for Diaby, Rolfes told Express Sport: “No, no. For sure we want to keep Moussa for as long as possible.

“I know a lot of scouts have been sitting on our tribune during our matches because we have a lot of interesting, exciting young players with high potential.

“So, it’s the same with Patrik Schick. We do not have any offers for him but we are not even looking for that at the moment. We would like to keep him and play with him next year in the Champions League.”

Rolfes has been enchanted by the exciting strides Diaby has made this season due to his dedication behind the scenes on the training pitch. His development provides clarification that the Bayer board and management are doing something right…

“When I see for example Moussa Diaby from when he joined three years ago compared to now in front of the goal, it’s not by coincidence that he scores more goals,” Rolfes added.

“You can see it in training. He works a lot on his finishing. He missed a lot of goals a few years ago, also in training but now it’s different. You can see the progress of our players…”

Speaking at the start of June while away on international duty with France, Diaby refused to rule out a return to PSG in the future but for now, he’s fixated on securing his spot in Didier Deschamps’ World Cup squad for Qatar – posing further doubts as to whether there is any scope for Newcastle to explore a transfer.

“Paris is my training club, the club that taught me everything. I do not rule out a return,” he told reporters.

“If PSG is brought to contact me, I will think about it as for any other club but yes, inevitably the upcoming World Cup will be a factor for the transfer window.

“It will be a difficult choice but for the moment I am focused on the France team and I will settle down afterwards with my family and my agents.”

Post-takeover, Newcastle have also previously shown interest in Bayer’s Czech international centre-forward Schick but their hopes of landing the striker, who was one of the standout performers at Euro 2020, recently evaporated when the 26-year-old penned a two-year contract extension in Germany.

Rolfes made it his very own personal mission to tie down the striker to new terms by flying to Prague – where the player was recovering from groin surgery – to secure Schick’s signature after his stunning 24-goal Bundesliga campaign.

“We knew in that position, there are not a lot of players on that level. It was a show of commitment from our side but also from his side,” Rolfes explained.

“We want to improve as a club but also grow with our players. Even if that’s just by keeping them for one or two more seasons.

“With our top players, there will always be a point where we consider selling them but Patrik is a key player, it’s a really big thing that he’s signed his contract.

“We did not receive any offers this summer, there has been interest in the past but nothing concrete. From both sides, it was clear we wanted to continue working together.”