Northern Ireland are still without a UEFA Nations League win after Stuart Dallas’ own goal handed Norway a 1-0 win in Oslo.

Erling Haaland was denied twice in the first half by stand-in goalkeeper Trevor Carson while Josh Magennis squandered a glorious chance to break the deadlock when his close-range shot was saved by Andre Hansen.

But Ian Baraclough’s side, having defended resolutely, were finally undone by a set-piece in the 67th minute, with Martin Odegaard’s corner striking the arm of substitute Dallas to find the net.

The result leaves Northern Ireland on one point from their four games in this year’s Nations League competition, while Norway move onto nine points in second place, level with leaders Austria who won 1-0 in Romania. 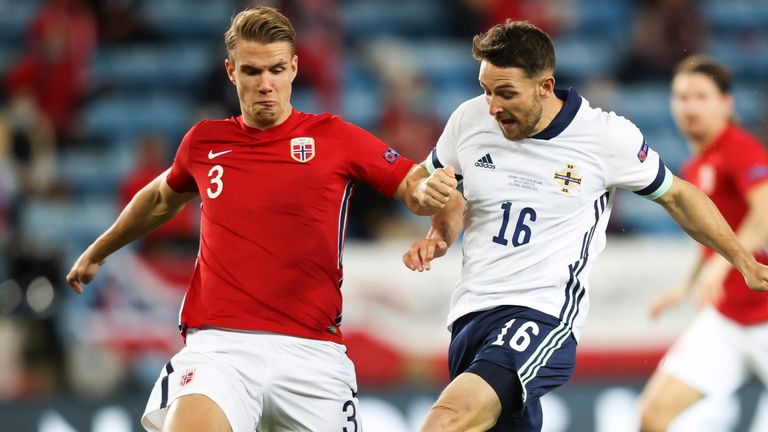 Man of the match: Dan Ballard.

No rub of the green for Northern Ireland

It was a seventh defeat in eight for Northern Ireland in this competition, keeping them bottom of League B1, though Ian Baraclough will take some encouragement from how some of his squad players stood up to a team that won 5-1 in Belfast last month.

With focus already firmly on next month’s Euro 2020 qualifying play-off final against Slovakia, that was arguably more important than the result here and there were positive signs from the likes of Daniel Ballard, Tom Flanagan and Michael Smith.

While Northern Ireland were beating Bosnia and Herzegovina on penalties in their qualifying play-off semi-final last week, Norway saw their own hopes ended by a disappointing home defeat to Serbia.

But they got that out of their system as Erling Haaland scored a hat-trick in Sunday’s 4-0 win over Romania and they threatened to pick up where they left off here. There were only 90 seconds on the clock when Haaland spun in the area and shot at goal. 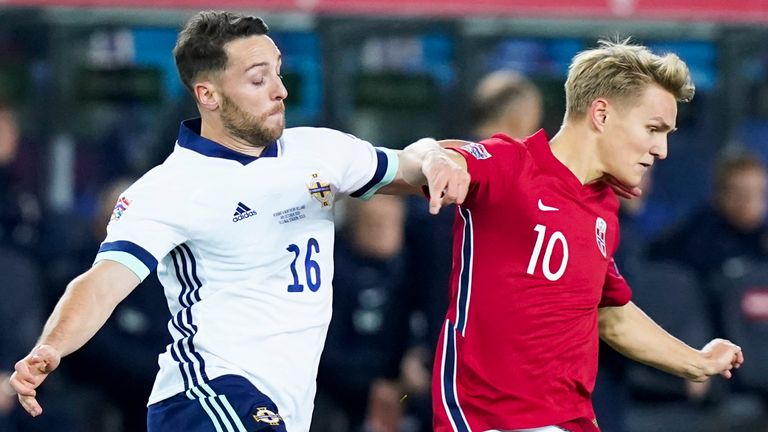 Trevor Carson, who only came into the side when Bailey Peacock-Farrell was injured in the warm-up, got enough on it to slow the ball down before Flanagan hooked it off the line.

It might have been the start of a Norwegian onslaught similar to the one seen at Windsor Park last month but instead Northern Ireland, who had emphasised the importance of starting strongly, were soon on the front foot.

Jonny Evans started his third competitive international in the space of a week but Northern Ireland manager Ian Baraclough otherwise made 10 changes for the Nations League match against Norway. They were forced into a late change as Bailey Peacock-Farrell suffered an injury in the warm-up with Trever Carson coming in.

Norway included Erling Haaland, who scored two in their 5-1 win at Windsor Park last month and bagged a hat-trick against Romania on Sunday. The 20-year-old striker started alongside Bournemouth’s Josh King, while Sheffield United’s Sander Berge was in midfield.

Conor Washington, impressive throughout the first half, broke through to force a save from Andre Hansen before Corry Evans fired over after a corner.

Josh Magennis cut in from the break to shoot straight at the goalkeeper after one counter-attack, then passed up the best opportunity of the entire half in the 19th minute. Washington worked hard to dispossess Odegaard before slipping in his strike partner, who could not lift it over the goalkeeper.

The game settled down after the early flurry, but Norway threatened again on the stroke of half-time as Haaland got free of Ballard but could not direct his header past Carson.

Jonny Evans, the only player to have kept his place from both the Bosnia win and the Austria defeat, appeared to pull up late in the first half and handed the captain’s armband to brother Corry as he was replaced by Conor McLaughlin at the break.

Carson was busy again six minutes in as Odegaard fed Josh King, whose low shot forced the Motherwell goalkeeper to quickly get down to his left. Norway threatened once more just before the hour when a corner made it through to Stefan Strandberg at the far post but he could not keep his shot down. 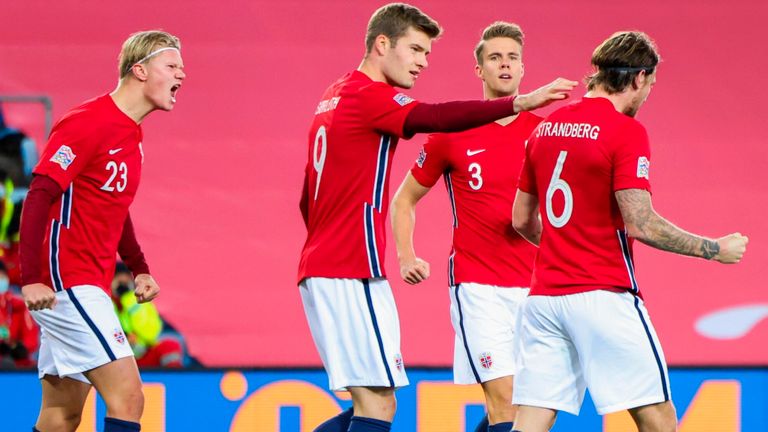 Dallas was sent on alongside Paddy McNair on the hour, but the Leeds man was then unfortunate to be caught out for the goal as Odegaard’s corner struck his arm and span beyond Carson into the far corner.

Northern Ireland struggled to muster a response, their best chance a Corry Evans shot from the edge of the area which went comfortably wide, but will look to pick out the positives before the showdown with Slovakia on November 12. “I thought from normal play we had a good shape. The 5-4-1 worked in our favour tonight with extra bodies around. Our full-backs were being exploited a bit in the first game at Windsor Park but we were much better this evening.

“We had a lot more bodies around the ball. Odegaard’s delivery from set pieces tonight was very good and it always felt that if they were going to nick something, it would be from that, and it proved to be the case.

“It was put into an area with pace, and defensively it was a bit messy on our part. You always talk about getting the first contact at corners and they did which led to the deflection. It’s harsh that it’s a Stuart Dallas own goal as there was very little he could do about it.”

Norway have back-to-back away Nations League games next month, with the visit to Romania on November 15 preceding their trip to Austria three days later. Both games kick-off at 7.45pm, live on Sky Sports.