Nuno Espirito Santo thinks referee Lee Mason does not have the “quality” to be a Premier League official following Wolves’ 2-1 defeat at Burnley.

Burnley lifted themselves out of the relegation zone after a 2-1 win over Wolves on Monday, with Ashley Barnes and Chris Wood finding the net.

Following the flat Wolves performance, Nuno decided to vent his frustration in Mason’s direction, questioning whether the referee is up to the job of refereeing Premier League football. He told Sky Sports: “Honestly I don’t like to say it, but I must say it because I will not feel right: the referee does not have the quality to whistle a game in the Premier League.

“This is a problem that we knew. We already had Lee Mason before. It is not about the crucial mistakes or the decisions, it is about the way that he handles the game.

“The players get nervous. Too much voices. He whistles by the voices when some players shout. He does not have [it]. We are talking about the best competition and clearly he does not have the quality to whistle the game. 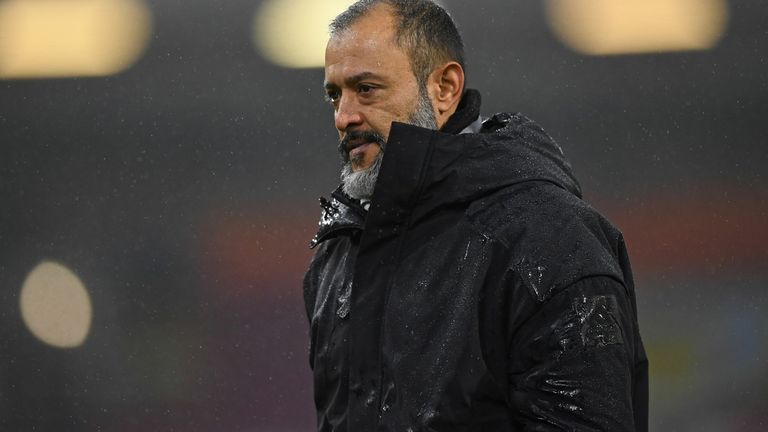 When asked what he wants to happen, he replied: “I just don’t want to see him more. That is what I told him. I hope that he does not whistle a game of ours again because all of the games that we have with Lee Mason are the same.

“He does not control the players. The players are constantly arguing, both teams. With all the other referees, the game flows, the decisions are accepted, there is dialogue. He does not do it.”

Burnley boss Sean Dyche, after a second win in three games, was delighted to see his team back to their best.

“It was a fantastic Burnley night,” he said. “Rain pouring, wind swirling, freezing cold, all the rest of it.

“It was a very good performance and a deserved win. At both ends of the pitch we operated well. We created quality chances. We rarely create 25 or 40 but we created a good number today.

“If we’re being hypercritical we could’ve controlled the game earlier if we had taken them but on the other hand we saw the game through well and deserved the win.”

Barnes opened the scoring in the 34th minute when he muscled his way in at the far post to reach a cross that Charlie Taylor had run some 60 yards to send over from the left.

It was the 31-year-old’s first goal since November 2019, a 17-match run which came either side of a hernia injury which sidelined him for the latter part of last season.

“I’m pleased for him,” Dyche said. “He’s had a tough run of injuries but he keeps working and he’s been a top player since he’s been here, on and off the pitch.

“It’s hard for strikers when they’re not scoring but I told him the chances would come his way and he would score.”

What Manchester United's rival managers have said about Paul Pogba