Ole Gunnar Solskjaer believes Manchester United have proven they can compete with Manchester City this season after the two clubs were drawn against each other in the Carabao Cup semi-finals.

United progressed through to the next round as they beat Colchester 3-0 at Old Trafford, with Marcus Rashford and Anthony Martial netting either side of Ryan Jackson’s 56th-minute own goal on Wednesday evening.

City, meanwhile, looking to defend their 2018/19 title, booked their place in the last four with a comfortable 3-1 win away to Oxford. Leicester and Aston Villa will do battle in next month’s other semi-final.

The Red Devils will no doubt take encouragement from the fact they stunned City in the Premier League to come away from the Etihad with all three points earlier this month.

Rashford, who scored the opener in United’s 2-1 win that day, said he was ‘bang up for another derby’ following Wednesday evening’s draw.

Solskjaer was similarly positive about the prospect of facing City, telling Sky Sports: ‘You always want to win trophies and games and we got a nice little draw coming up so it’s exciting times coming up.

‘I don’t feel anything is written in the stars. You work hard, take what you get.

‘We’ve shown that we can play well against teams like City.’

At his post-match press conference, Solskjaer added: ‘Of course we do really respect them. In my opinion they’re the best team in England, they can out-football you so we need to get our game-heads on and be ready for them.

‘But we’ve shown them as well that we can cause them problems so I think it’ll be two fantastic games.

‘We’re pleased with the result but we’ve got to stamp our authority more. I don’t think you beat City twice with the same tactics.

‘We’ll have to do better. Pep will have them fired up.’ 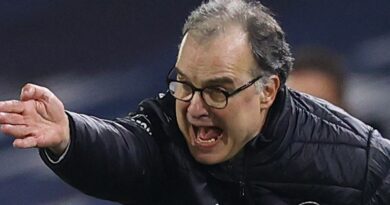