Home » Soccer » ‘One of the stars of the future’: Hrustic dazzles as Socceroos return

No Mooy, no Rogic but no problem for the Socceroos, who have unearthed another creative gem in a dominant 3-0 World Cup qualifying victory over Kuwait.

Australia nudged themselves one step closer to the 2022 World Cup in Qatar with a resounding win but it was the unearthing of a possible future star of the national team that could have a greater lasting effect than just the three points. 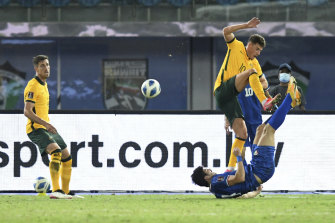 Midfielder Ajdin Hrustic, right, may be a star of the future for the Socceroos.Credit:AP

The tone never looked like turning after that point as Australia tightened their grip. With the word “heat” banned by Arnold, the Socceroos did their best to ignore the near-40 degree temperature that smothered them even in the Kuwaiti night.

To the onlooker, however, it barely looked to affect them. Their passes were hit with precision, their off-the-ball movement incessant as they overloaded a Kuwait defence who could barely find reprieve.

At the heart of Australia’s attacking gameplan was Hrustic. One of the fresher faces in the squad looked every part the seasoned veteran. Given the conductor’s baton, he dictated tempo as the fulcrum between the forward line and midfielders but his role wasn’t restricted to an organisational one.

Midway through the first half, the German-based man created Australia’s second with a superb solo run. Driving into the box, Hrustic darted past one marker with a burst of pace then turned away from another, drawing a foul as his run was checked and winning Australia a penalty. 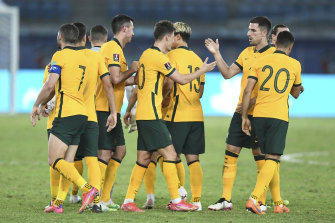 The Socceroos need just a win and two draws from their final three matches to secure a spot in the next round of qualifying.Credit:AP

It may not have drawn significant contact but the referee ruled enough of Hrustic’s line was blocked to award the Socceroos a spot-kick.

Boyle’s spot-kick was palmed away by Kuwaiti goalkeeper Sulaiman Abulghafoor, but only as far as Jackson Irvine who tapped in to make it 2-0.

The toll of the heat began to emerge in the second half but, even then, it did little more than slow the tempo.

The complexion of the match remained unchanged and, in the 66th minute, Hrustic struck their third. With Rogic and Mooy watching from their homes, Hrustic showed why their return to Graham Arnold’s side may not be as smooth as either hoped with a brilliant free-kick sealing Australia’s third. Hrustic curled a left-foot dead ball over the wall, into the side netting with such bend Abulghafoor was left helpless.

His emphatic finish put Australia five points clear of Kuwait and Jordan in second place, needing just a win and two draws from their last three games to seal progress to the next round of qualifiers.